So they are doing work at an interstate exit I have to drive past on my way to work.


Normally, not a big deal, except that this morning, one of the stoplights was not working. The drivers entering the intersection were, actually, doing a pretty good job of dealing with it, pretty much treating the now uncontrolled intersection as if it were a  4 way stop. Traffic was flowing pretty good, but still…


I pulled out my cell phone and called the Indiana State police 800 number. No joy, I kept getting connected to Indianapolis rather than the closest post.  “No big deal”, says I, “I drive right past their office and can stop and let them know….”


I pulled into their lot and, just to be sure that I was legal, disarmed and walked into the office. Good thing too.


A snarly looking man opened the window and said “What do you want?” ….Nice greeting. Oh well….


“Just thought that I’d let you know that the stoplight is out about a mile from here…..West side of the highway. Maybe you can call someone?”

“Perhaps you could call them? I don’t have the number…” I suggested.


With that, he closed the window and walked away.  Nice. I successfully restrained myself from knocking on the window to ask him why he was being a total dick or other such questions, and walked out the door


So I left the building, googled the county I was in for the Sheriff’s number, called it, and let them know that the light was out. The dispatcher was polite, thanked me, and said she’d inform the right people.


When I drove past the area about an hour later, the lights were working again. Seems that the County folks take their job seriously.


Now: the Indiana State Police no longer “Serve and Protect”, but their mission statement is:

The Indiana State Police shall provide the most professional, effective and courteous police service possible at all times and with every endeavor.

When I later called the folks at the post to suggest that they might want to take a look at the desk guy’s attitude, I was again told that the “State Police have better things to do” and that calling the county sheriff is the correct procedure.

Seems that they haven’t read their own mission statement. Surely they have a number close at hand for the Sheriff, rather than making me look it up on my smartphone? Not to mention the whole “courteous” thing…or the “safety” thing…or the “assist” part either.

Really, WTF do we need the ISP for that the county folks can’t do?

So I have this employee. Nice kid. Nice guy overall. He works hard for me, and does a decent job.

But he never has any money. Always broke, always behind.

Today, he asked me if it was legal for the ATM at the convenience store to charge $5 for each transaction. He was complaining that they had just raised the charge from $4.

I asked him why he didn’t use the banks ATM, as that should be free.

“Too far out of my way.” he replied. “I gotta go 6 blocks off my route to work…that takes 10 minutes. makes me late for work”

“I just hate having to spend $5.00 every day to get my money,” he said. Ignoring the suggestion.

“How much do you get every day?” I asked.

Some people just screw themselves. He’s spending $25 per week to have access to his $100. Because he can’t control himself.

And he wonders why he is always broke.

Seems that George Zimmerman gets a new judge.

I still don’t know if he is innocent of murder, or just having defended himself. I haven’t heard enough facts to make a decision. And I realize that, and am waiting to hear the facts.

And that is the difference between me and Circuit Judge Kenneth Lester Jr. .

I, personally, think that the Judge Lester should be removed from the bench as unsuitable to adjudicate anything more than parking tickets.

Or perhaps a bigger subsidy.

Whatever. The Volt still isn’t selling. So they are “temporarily halting production“.

Gee, who would have guessed that the public doesn’t want a cramped, sluggish, expensive car with a 15 year payback (based on fuel savings to catch up with the price you (over) paid vs any other mid sized sedan) that rides poorly and has little cargo room?

What are the stats on officer involved shooting with inured (by the police) bystanders vs concealed carry shooters with innocents shot (by the CCL holder)? How about shots fired vs shots hitting the intended target? 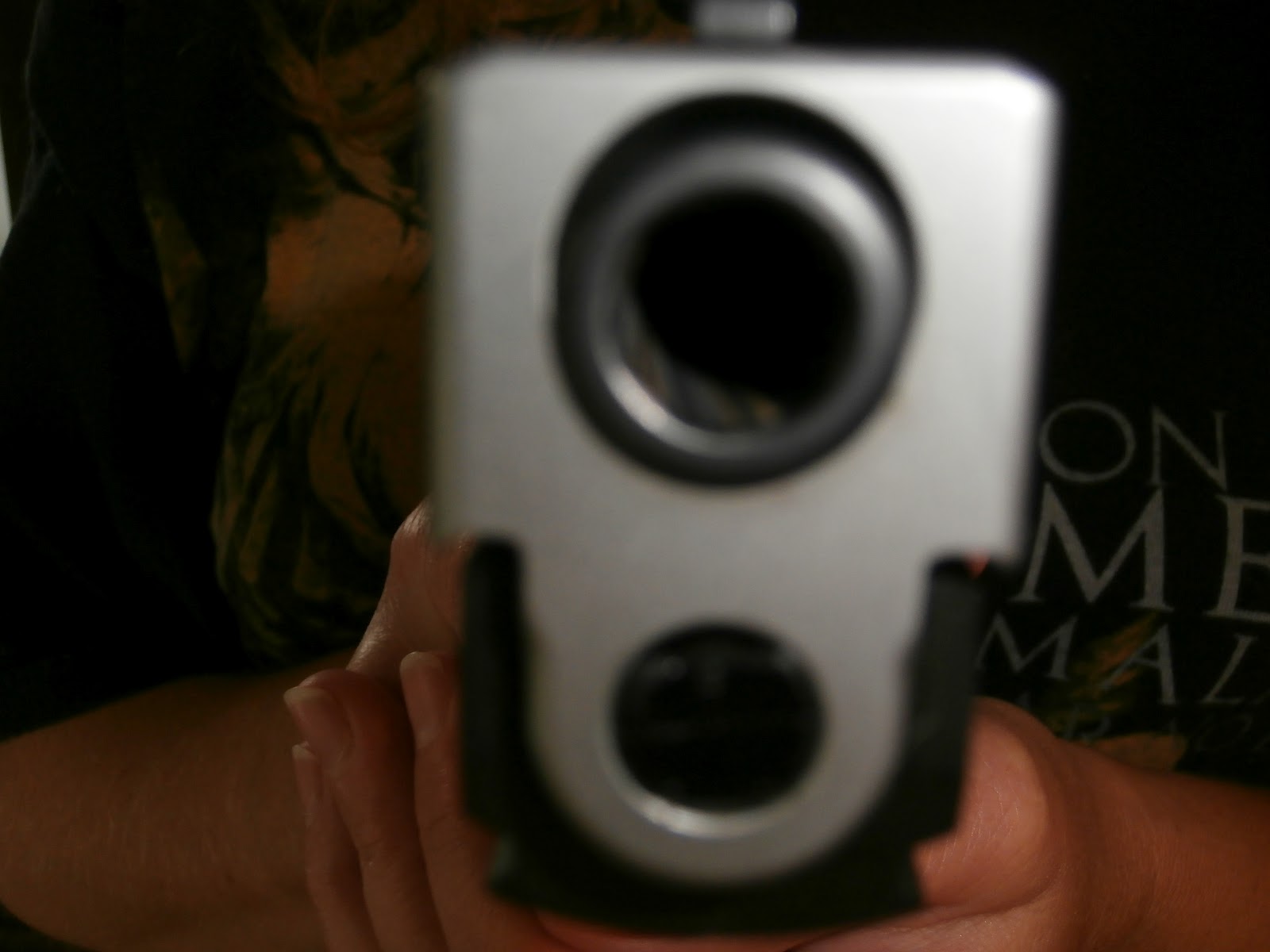 I tried, but was unable to find even a hint. Which bummed me out, ’cause I wanted to see who is more dangerous to be around, if and when.

Because, after all, only police should have guns…..

Even the Times covered it.

Had this been a concealed carry holder doing his thing as a private citizen, wounding 9 (nine!) bystanders, the hue and cry would be incredible. The private citizen would be castigated and likely charged.

But it was cops…who “had no choice” and who were “heroes”. Who wounded (and/or killed) 9 bystanders.

Dude expressed an opinion on his Facebook page. Maybe a bit radical, maybe what others might perceive (if they squint real hard) as a threat. But was there any real threat?

And gets, not only arrested, but incarcerated.

No due process, no trial., no bond. Held against his will until the agents of the state say he is OK, and he is taught to not say things which people find offensive. .

What happened to the First Amendment?

This could be you, or me, or anyone who has an opinion that the State doesn’t like. I actually don’t agree with much of what he has said, but that doesn’t mean he doesn’t have the right to say it…Or is it only things which the State’s minions agree with which are acceptable?

Soon he’ll be given anti-psychotics and sent to a reeducation camp counseling.

Look: Facebook may not be the appropriate forum, but the dude does have the right to free speech. And the right to not be held against his will unless the State can prove that he is a threat, having the means and motivation and INTENT. Can they prove he does have these things? If so, bring him to trial. Or let him go. 30 days? Really? How about all those SEIU/AFSCME/AFL-CIO folks who advocated violence….Gonna pick them up too?

Half the blogs I read, and this one, have published things which the State might find offensive.

When “they” come for me, are you gonna speak up? How about the next guy, and the next, and the next….Until they come for you and there is no one to speak for any of us?

Hey, it’s been nice knowing you.

To my fellow bloggers:
I’ll save a spot on the bench in the camp so you have someplace to sit when they bring you in too. Bring beer if they’ll let you.

Update: It appears that the justice system (even under Eric Holder) actually works, (if slowly).

When he is released, he should sue each and every person involved. And, if nothing else, use the governments own tactics against them, and tie them up in court and cost them money, even if he has no chance of winning due to any immunity clauses. (not that they should apply here anyway, but that is another fight for another day) I’d donate a few bucks to THAT legal fund.

But not if you are a private citizen…

Seems that the ATF doesn’t like it when citizens step on their turf and sell weapons and ammo to Mexicans.

So all I have to do to be exempt from laws (especially federal firearms laws) is to get a government job?

Look: I don’t doubt that this is illegal, immoral, and just plain wrong. But if you are going to charge anyone with this crime, then you should charge everyone who does it with the crime. Especially the “Conspiracy” part. Especially with Holder and the management of the ATF.

Were I them, I’d argue that if they are charged, then it violates the Fourteenth Amendment.

ETA: I mean, the Feds set the precedent, right? They even give special treatment to some managers who do this sort of thing (HT Instapundit)

Sometimes you can, Same people are able to forgive, even the murder of a parent.

Me, I’d keep the hate alive, and find the skills and the means to hunt down each and every one of the slimy motherfucking murdering bastards. Starting with the murderer Lon Horiuchi and working up through his masters bosses, and then, if there I were still able, to all of his co-workers that were there for the siege and the coverup.

Yeah, I know that the family got 3+ million dollars, and likely just wants to get on with their lives and that revenge won’t bring Vicki Weaver back….But it’d sure as hell make the next guy think before he acted. While I am not advocating it, I want to point out that having dead feds would be a lesson for the rest to behave properly. Institutional memories and all that you know…

It’s about time that it happens again…the folks at Ruby Ridge are all mostly retired, and that leaves the next generation of agents, which has not seen the horror, ready to abuse the citizens they are supposed to serve.

Forgiveness will not prevent that.

I think I’ll go dig out my copy of Unintended Consequences and re-read it.

Seems that Pensacola Fla police officers actually can do things to get themselves fired, unlike many departments….

Look: I know it is a tough job, and you generally deal with the worst third of our citizens. I understand that many of the folks you deal with are drunks, druggies, thieves, whores, or all of the above.

But if you can’t “not go there” or if you think that this sort of behavior is ever justified, then you shouldn’t be a cop. If you just choose to say nothing if you know that a fellow officer is acting like this, or is escalating his behavior until he is likely to, then you are part of the problem. Saying nothing, or establishing the “Blue Wall” does nothing to earn you respect among the citizens.

I am glad to see that police can be fired for something other than a pile of drugs in their garage, or a dead hooker in the trunk or a live boy in their home. Now if it would just become contagious….if all the other police departments could catch this issue.