How the standards for what consitutes acceptable housing for unaccompanied (or abandoned) immigrant childred have evolved?

Those same places that the Trump administration provided for the Border Patrol to house kids, that were derided as “hellish” are now being reused by the Biden era folks and are “havens” for these kids.

If there is ever an example of media bias, this is it.

That a great number of people think that Steven Colbert delivers news to them, after the “News” program in the late evening….

This is as stupid as those folks who believed that Rush Limbaugh was delivering anything other than an Op-Ed radio show.

Folks: THis is ENTERTAINMENT (if you find it entertaining, I find it irritating), nothing more. It ain’t news, it isn’t there to inform you, it is there to (at best) shape your opinion of happenings in the world.

So one of the flight instructors from back when I got my Private Pilots license called me…..He’d like to try shooting, could I help?

We spent an hour doing a familiarizaition and safety briefing.

Folks in Chicago are WALKING on it…..which is asking for death, ’cause it varies in thickness from feet to inches (or less)… it is often not clear hard ice, but more like sorta compacted snow.  And you can’t tell if it’s gonna hold your weight until you stand on it, after which it is generally too late.

Darwin at work here, folks. I know of several times in my lifetime that people have died from falling through the ice over Lake Michigan. Pretty stupid behavior. Rescue crews should not put their lives in danger doing any sort of rescue or recovery of people stupid enough to do this.

Rumor has it that politicians were urged to come to Texas during the cold snap and make speeches….Texas needed the Hot Air.

And that someone ususally has Deep Pockets.

He was sleeping with his 3 year old brother when he passed, BTW:

“Pavon’s mother, Maria Elisa Pineda Guzman, said the family had been sleeping in one room to keep warm. “He fell asleep. He had a shirt, a sweater, two pairs of pants, socks on,” Pavon’s aunt, Jaliza Yera, told K’HOU. His stepfather checked on him later that evening and put another blanket over him.”.

No way it got cold enough for him to die of hypothermia….not dressed like that and covered in several blankets with another sibling in bed with him.

I’m thinking they simply see this as a payday.

I’m suprised his death hasn’t been attributed to covid though….

Lake Michigan Ice, that is….

So Saturday, the day dawned bright and clear…..the ceiling was 25000 feet, with a bit of haze and the winds were calm.

Since  (due to weather) I hadn’t flown since Feb 1st, and since flying, like shooting, is a perishable skill, I turned on the engine heater via the internet, drove to the airport, opened the hangar doors, preflighted, and listened to the ASOS….started the plane and taxiied to the runway. Did 3 touch and goes, then departed to the west. I left the pattern, turned north and flew to Lake Michigan. There, I turned east and flew along the lakeshore. I asked South Bend Approach for Flight following as the lakeshore is often full of planes doing sightseeing (as I was)….The shoreline was covered with ice, out to about 1 mile. Last year there was no ice….which led to a great deal of erosion along the lakeshore. 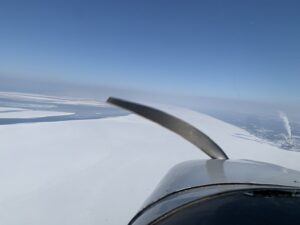 Here you can see the shoreline off of Michigan CIty, facing east into Michigan, The NIPSCO coal fired power plant is towards the bottom of the photo right by the harbor entrance. Ice all along the lakeshore, out to about a mile or more.

I flew back along the lakeshore to the west, and went to the state line, turned and went back east past Gary (KGYY). Here is the view towards Chicago from (approximately) the Indiana/Illinois state line.  You can’t see the skyline in the photo, but it was there to the naked eye, if somewhat indistinct. You can see the ice cover on the lake though… 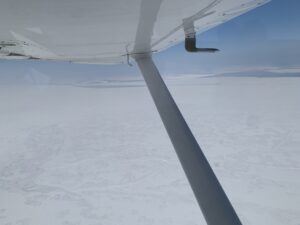 I returned to my airport and did a Short Field landing for practice.

Overall, 4 landings and 1.6 hours of flying.

I had originally planned to go see Eaton Rapids Joe for lunch on Sunday, but the weather chose to make that a bad idea due to icing, so we cancelled. (My next plane will have some ice protection…the 182 has none). I have experienced icing in the 182 once…..I now avoid it as much as I can. We had icing in Northwest Indiana from 2 pm onward, so that was a good decision…..But I was saddened that I had to cancel lunch with Joe. Next time, I guess. It was the right decision, as I could have flown there in good weather, but coming back, well, that might be interesting. …..We had ice at 3 PM, and overcast by 5. Sometimes discretion is the better part of valor and all that. Soon it will be warm enough that icing will be a non-issue, but right now, I gotta respect the fact that it can kill me.

Anyone know the answer to THIS QUESTION?

SO where are the cries from the media and the Dems (but, again, I repeat myself) about the slow and poor response of the Biden Administration in getting FEMA and other agencies to help the folks in Texas?

Asking for a friend….

Proving those of us who said that the mask, be it N-95 or cloth, is useless because they simply don’t fit well enough to do what the CDC purported them to do…filter spittle nad other droplets.

SImply astounding the levels of idiocy and incompetence at the CDC…

Or, it could be that they are simply fucking with us to see what they can get us to do…..