Take a moment, and give your thanks that you have that freedom, and don’t squander it.

Don’t let their sacrifice be in vain. DON’T LET ANYONE TAKE THAT FREEDOM AWAY. Not an outside government, and especially not your own government. Many died defending the country AND IT’S CONSTITUTION. every day, make their sacrifice worthwhile. Keep that which they have paid a great price. Don’t let anyone, ESPECIALLY YOUR OWN LEADERS take that away. They agreed to defend the US and it’s constitution “against all enemies, foreign and domestic”. Don’t let anyone or anything, foreign OR domestic steal that away from you. Keep the freedom.

Someone else paid for it. With their lives.

That sacrifice should mean something. And it should be valuable to you.

So take today to say thanks. Take a moment from your barbecue, your lawn work, your home improvements, your beer drinking, your car work, whatever you are doing on Monday, Memorial Day, and think of all those brave souls who gave you the freedom to ignore them on this day, should you choose to.

And in closing, to all those who paid the price, their friends, family and comrades, I thank you from my heart.

Go here to see what I am talking about.

You should Read It.

Now think about what it says.

I’d prefer a leash on the guard dog, rather than  having to shoot him.

But both are options.

Let us hope that the law which they claim to enforce will decide to reign them in.

The other options are not good for any of us…or them.

Both courtesy of WRSA

Well, I was going to work on the ramps for the trailer (making new ones to replace the set that were stolen) but instead, as the forecast for Sunday was scattered showers and windy, but today (Saturday) was overcast but calm, I decided instead to shoot (or at least practice) for the postal match, whose deadline was fast approaching, and likely Saturday was the only day I might have a chance to have the time to shoot.Plus the nerve in my wrist wasn’t acting up too much….

So I packed up 2 rifles and the range bag and made a range run. I live only 2.8 miles from a private range (of which I am, of course,  a member). This range allows rimfire rifles, as well as any pistol up to 44 magnum. They have a 50 yd and a 25 yd outdoor range, so I shot my targets there. (living that close to a range like that makes for an hellacious ammo budget, let me tell you….) Normally, I only shoot pistols there, killing bowling pins or paper at 12 or 25 yards (or 50 feet indoors).

Anyway, I went to the range after printing out 15 targets (so I could practice) and after about three practice targets, I realized that my offhand shooting skills were….let us be kind and say “rusty”. I was wobbly and shakey and kinda twitchy. My shoulder cramped up enough after 3 targets that I had to put the rifle down and rest, as my groups opened up a LOT.

So after a rest, I tried again. One thing that was a pain during practice was adjusting both the scoped rifle and the open sighted rifle to shoot at 25 yds. Normally, I shoot from a rest or kneeling or prone at 100 yds… not at 25! It took 25 rounds to walk the point of impact down far enough using the scoped 10-22. 34 clicks down.  1 entire target just to adjust for the short yardage.

Finally, having the scope adjusted enough I was able to actually sight ON the target rather than below, I rested for about 15 minutes and shot my target for score: 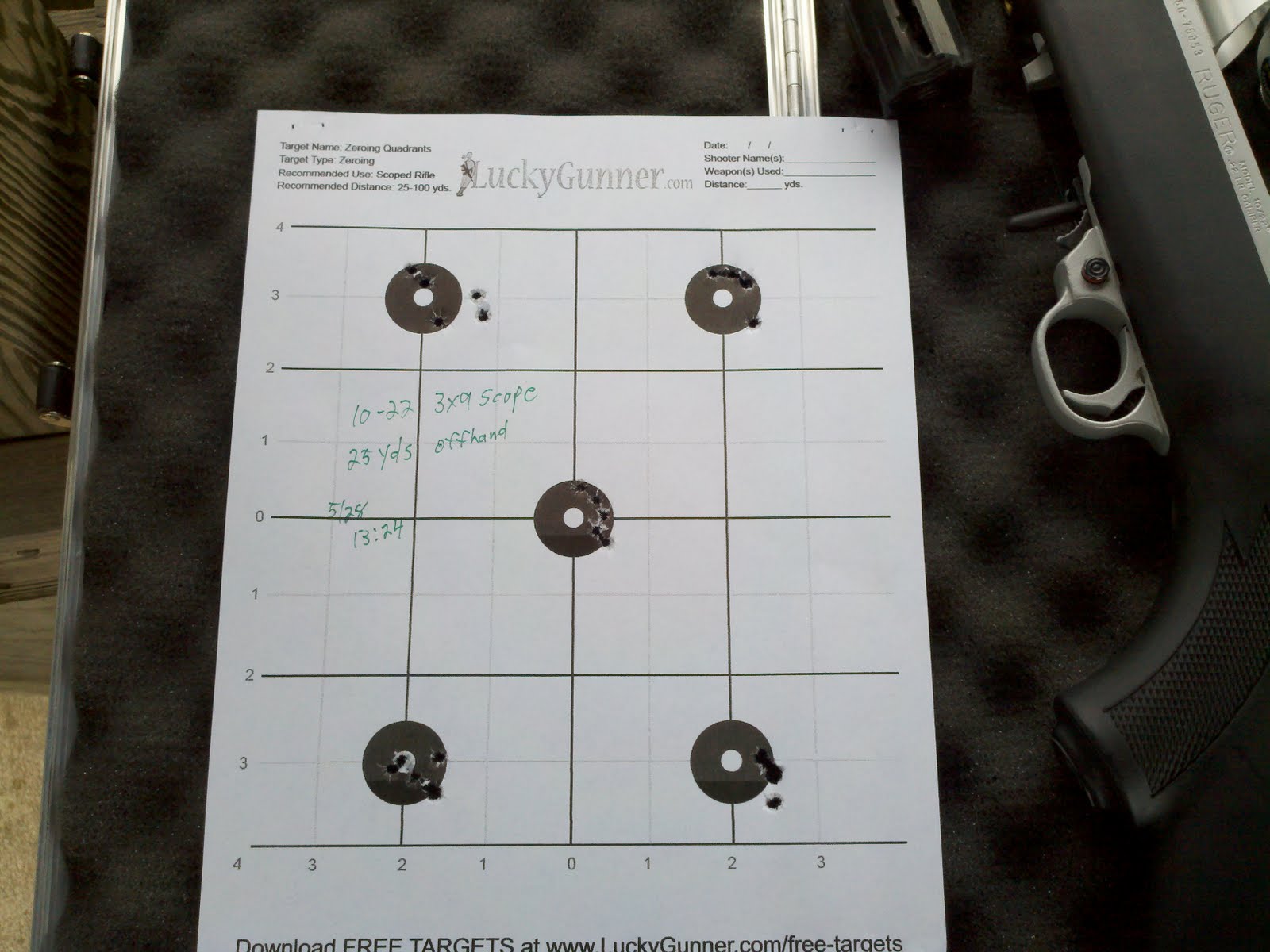 So I put that rifle away, and rested for a bit, and then took out my J.C. Higgins model 30. One of my favorite rifles, and one that I have a great deal of sentiment about, as it was the rifle that my dad and grandfather taught me to shoot with. Having laid broken in a guncase for many years, (the rifle, not me!) I finally, with the help of a friend, learned about Numrich, and got a new extractor for this rifle. With a bit of fitting and a great deal of help, I was able to make this fine rifle shoot again. And shoot it does. Not bad for a rifle 12 years older than I am.

Again, I had to adjust the sights WAY down, took 25 shots to find the target, and by then I was shakey again, so I rested, and walked a bit. 20 minutes later I walked up, loaded 5 rounds and began shooting for score. 25 rounds later, my shoulder sore from holding that rifle up, I had this target: 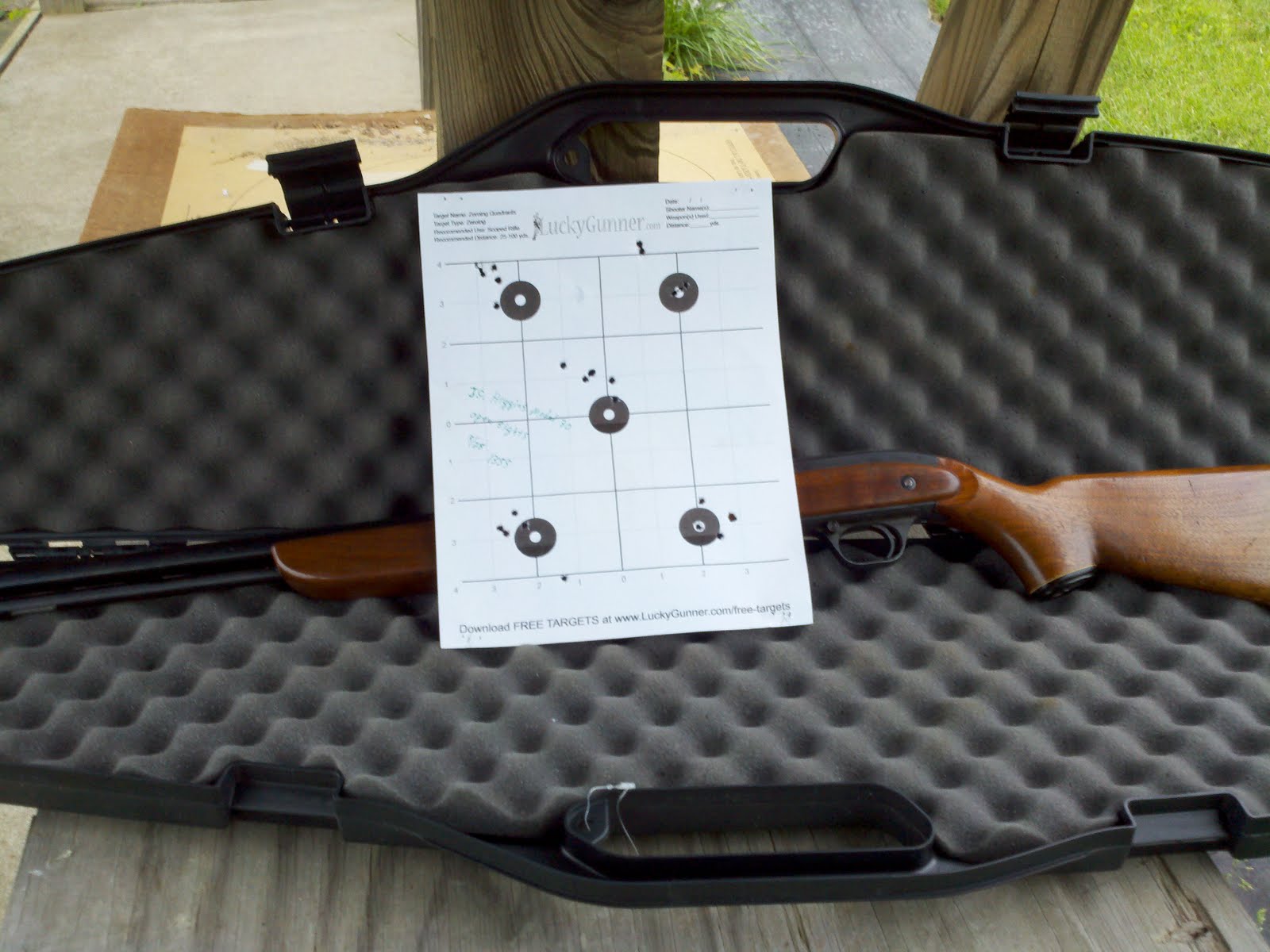 While I am not sure how he is gonna score them, (or even if I can enter 2 different times, one scoped and one unscoped) I present these for scoring.

Here is, perhaps, a better set of pics for scoring: 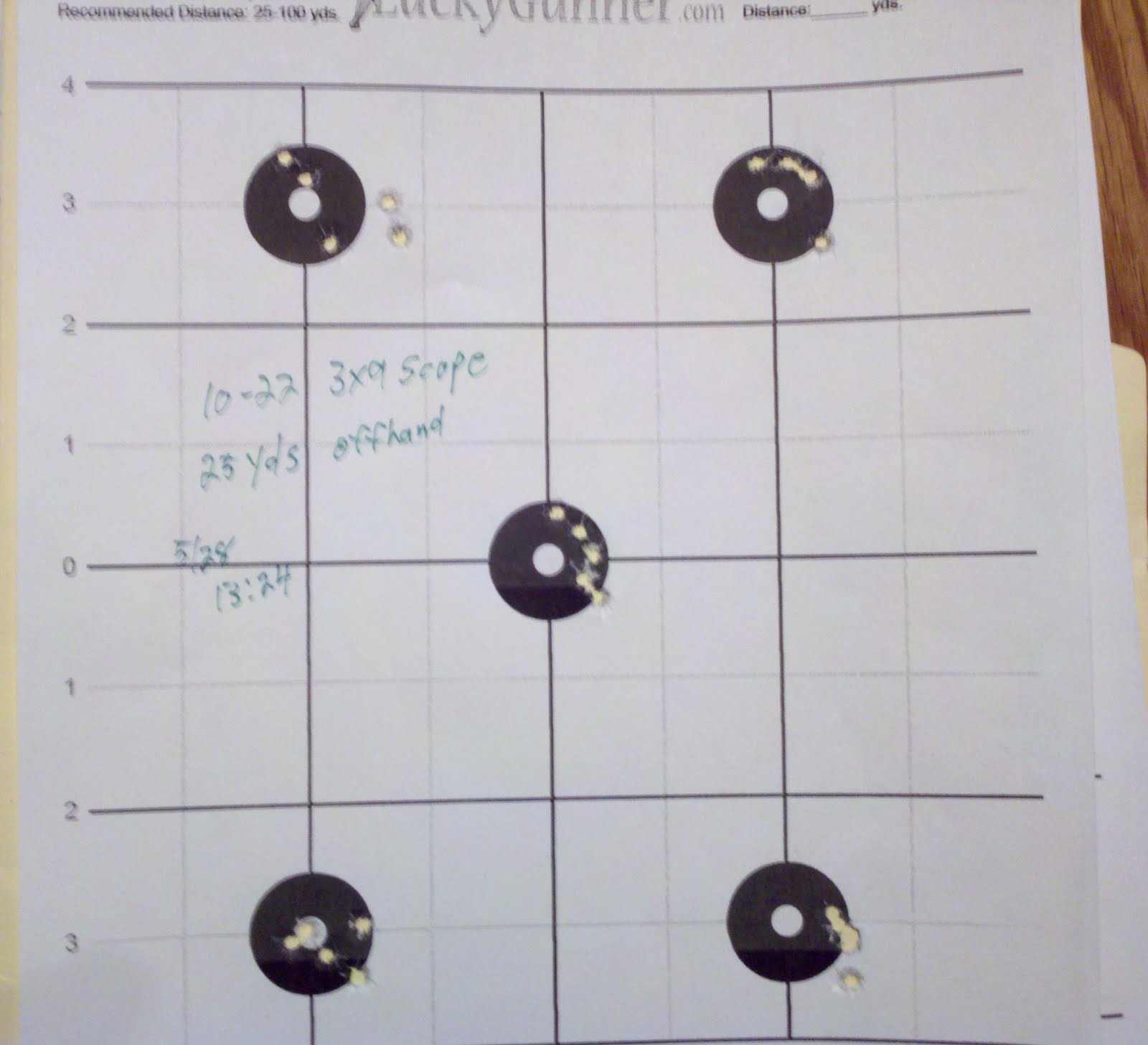 The JC Higgins….Open sights: I score this as a 10. 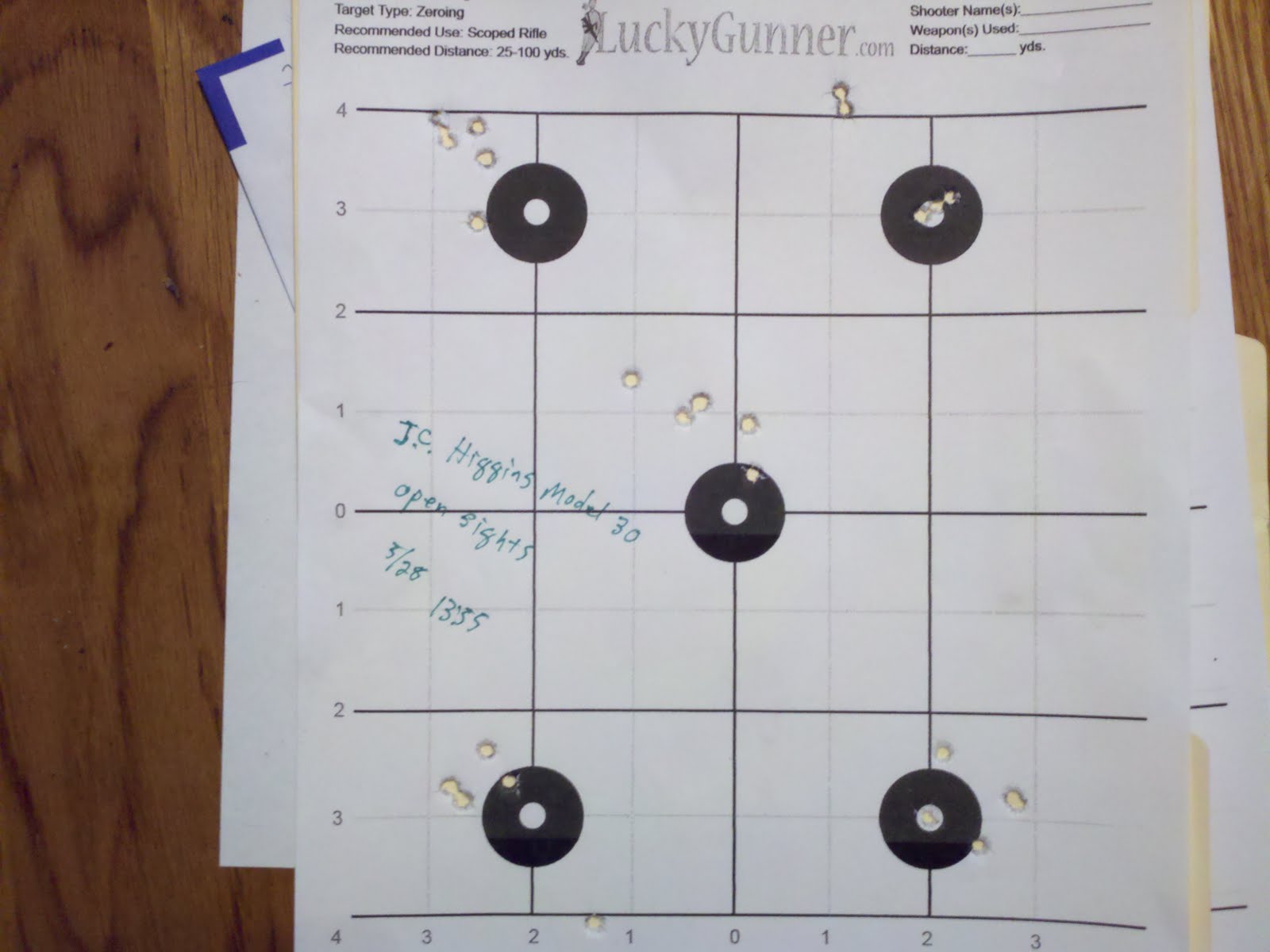 I actually used to be able to shoot better. Either I am out of shape, or just getting older. Or maybe it’s the drinking.(or lack thereof?)…I really don’t know. But I can hit the paper at 25 yards, at least.

You still have time! If you want to enter, HERE are the rules.

Hey, after seeing these, you know that you aren’t gonna come in dead last. I think that I have that spot covered.  ETA: Apparently I hold first place. I thought that this would be a poor showing. (You folks should see the guys I shoot with!…this wouldn’t even be a target that they’d let anyone see)

The sad part is that I could likely shoot this well with my .22 Bullseye pistol. It is all a matter of practice….And I am way out of practice with a rifle.

ETA: this was shot using Federal bulk ammo from Wal-Mart.

Or at least, they will.

Wonder what they will replace it with? Gnomes cranking little generators?

‘Cause renewables aren’t going to replace 2/5 of their energy, not even by then.

on the 4th amendment violations/trashing of the Constitution, and an example of how it will end for many of us.

Now decide how we can fix this. Or how you are gonna deal with it if THEY come to your door. Or not deal with it….Whatcha gonna do?

You get lucky. Mother nature is capricious.

Do you have a tornado shelter?
(I do) Concrete block and concrete roof. Below grade. Roof should handle the house falling in on it.

Is it stocked? Food, water,clothing, lighting?  (mine is).

Can you find yer Bug Out Bag with 30 seconds warning? (mine is IN my shelter!)

Doncha think that those folks in Missouri wish that they had a BOB that they could find? Or a stocked storm shelter?

Think about it.Decide. Is the cost of one good weekend away worth not being in the position of the victims in Joplin? ’cause that is all you need to provide for a basic stocked storm shelter.

You CAN prepare for this. You can’t stop it, but you can mitigate the damage Ma Nature can do to you.

Generally, I find his blog to be a bit too liberal, but I read it for the content, if only to make me think, and to keep me from becoming too one sided in my thoughts and philosophies.

But this one is outa the park, and you should take the time to read the whole thing.