Skip to primary content
Skip to secondary content
Today would be a good day to fly for a while.

Of course, there is the issue of getting the plane out of the hangar without frostbite, and I’m not sure I could get any oil temperature if it would start….and at -20F …i’m not sure the avgas won’t be frozen…

I’m going on Saturday though.

They are giving out “Real Feel” temperatures…and I got that…I understand that people need to know that information if they are going outside. But they are using “Real Feel” in place of actual temperatures. My pipes, more or less, are out of the wind. They don’t care what the ‘Feels Like” temperature is. Nor does my truck. Once it has cooled to the actual temperature (as measured by a thermometer) they don’t get any colder. And that cold measurement is what matters.

But how cold is that temperature? Not -48 degrees. More like -19. Big difference.

I’d rather have ’em give me BOTH temps. Real Feel/Feels Like Wind Chill matters to those folks outside, but we need the REAL-Real temperature as well.

I suppose that the (not as low) temperatures (-25F) don’t make for the hysteria that the “feels like (-48F) temperature numbers do. But still.

And, as an aside, have a thought for the folks that ARE working outside….the Power folks, the Water folks (lots of water main breaks in cities don’t do Real Cold well) and others who are bringing much needed services to you home. I’ve worked outside in weather like this…and even with the proper gear, it is bad……which is why the scar tissue in my hands and fingers hurts so much in the cold….and why I didn’t leave my house except to help my neighbor today (and likely won’t tomorrow, either).

I loves me that Global Warmening stuff.

Spozed to be as cold tonight too, but not as windy.

Sure looking that way….

Seems that there was a report from some actor “Jussie Smollet”…he claims that he was walking back from an all night Subway Sandwich shop when he was (allegedly) set upon by “several masked men” who shouted “racial epithets “while punching and kicking him”…who then “Placed a noose around his neck” and said things about “Trump” and “MAGA Country”…..

He then, according to reports, went home and called his “friend” or agent who then called police, who took a report. Investigation is ongoing.

A couple of points:

The police are very careful to use the word “alleged” in every one of their reports. As is the News Media….who can’t wait to tell us about racist Trump supporters.

Mr. Smollet “wasn’t seriously injured”. Odd, 2:1 or greater odds and he only got a bruise? They apparently knocked him down and incapacitated him long enough to “wrap a noose around his neck”…but he wasn’t hurt. Odd, that.

Said “noose” was still around his neck when the police arrived, tens of minutes later….Strange, that.

There is no other corroborating evidence….In fact, there may be video of him walking home, apparently unharmed.

The use of the word (and symbol) “noose” is becoming prevalent in the Black community when they make any complaint about white people, at least in the greater Chicago area.  Every time there is an (alleged) racial incident, there is always a “noose” involved. One wonders.
Thing is, a noose isn’t, at least to most white people, a symbol of hate.  Only black people. Ones that have been told for years that white people hate them and we are all racists. Lynching and all that(never mind that whites were lynched too)…And MAGA? Really?

I really believe that this is made up. Too many indicators. I mean, I wasn’t there, and I can’t say he is lying, but it sure doesn’t pass the Smell-O-Meter test…..It smells like the night soil of a large and well fed male bovine.

But then again, I’m a white guy. and we are all racists. But then again, on the other other hand, most of these types of claims are later found out to be false. Not all, but most. And this one has all the hallmarks of falsification.

BTW, if they find evidence that he is lying, I hope he gets some punishment and has to pay for all the man-hours used in this investigation.

Went to the house, opened up the well room, and set up 2 heaters. The room was about 20 degrees F.

Turned OFF the well at the panel, so if there were any broken pipes, we wouldn’t have water running everywhere…opened the faucet valves and flushed the terlets so that ther was somewhere for the water to go.

Set a small fan to blowing the warm(er) air on the pipes, and went to the house to get a heat gun for some more persuasion.

When I returned, Bill said that water was dripping from the upstairs faucet. opened it fully and had a small stream until the pressure tank was empty.

Turned on the well, and the faucets first dripped, then ran a stream of rusty water.

Ran all the faucets for 10 minutes, flushed the toilets twice each, and then shut everything off. Ran the well until the pressure switch hit cutoff and then watched. And listened. House was quiet.
No bleed off of pressure and no hissing of water. Waited 10 minutes. Nothing. I don’t think he broke a pipe. I hoe not.

I left one heater in his well room set to 40F and buttoned it all back up. Came home. He does have a light bulb in the room for heat, but, when it burned out, he replaced it….With an LED. Yeah.
I’m gonna get him a heat bulb, or just might leave the heater there set as low as it will go for the rest of the winter.

I think Bill (the neighbor) was lucky. So far, no broken pipes.

I’m in for (hopefully) the rest of the day.

It’s a good time to scrub the kitchen floor and so some other inside jobs.

He didn’t leave water running as I suggested when I called him yesterday.

So I hope his well isn’t frozen.

Truck is warming up and I’m about to load small space heaters and extension cords.

Off to thaw pipes and who know what else.

THere are days when I wish I was the kind of guy who could just say”no”.

Winds chill is only at -40F

But, the skies are clearing, so it may get worse. 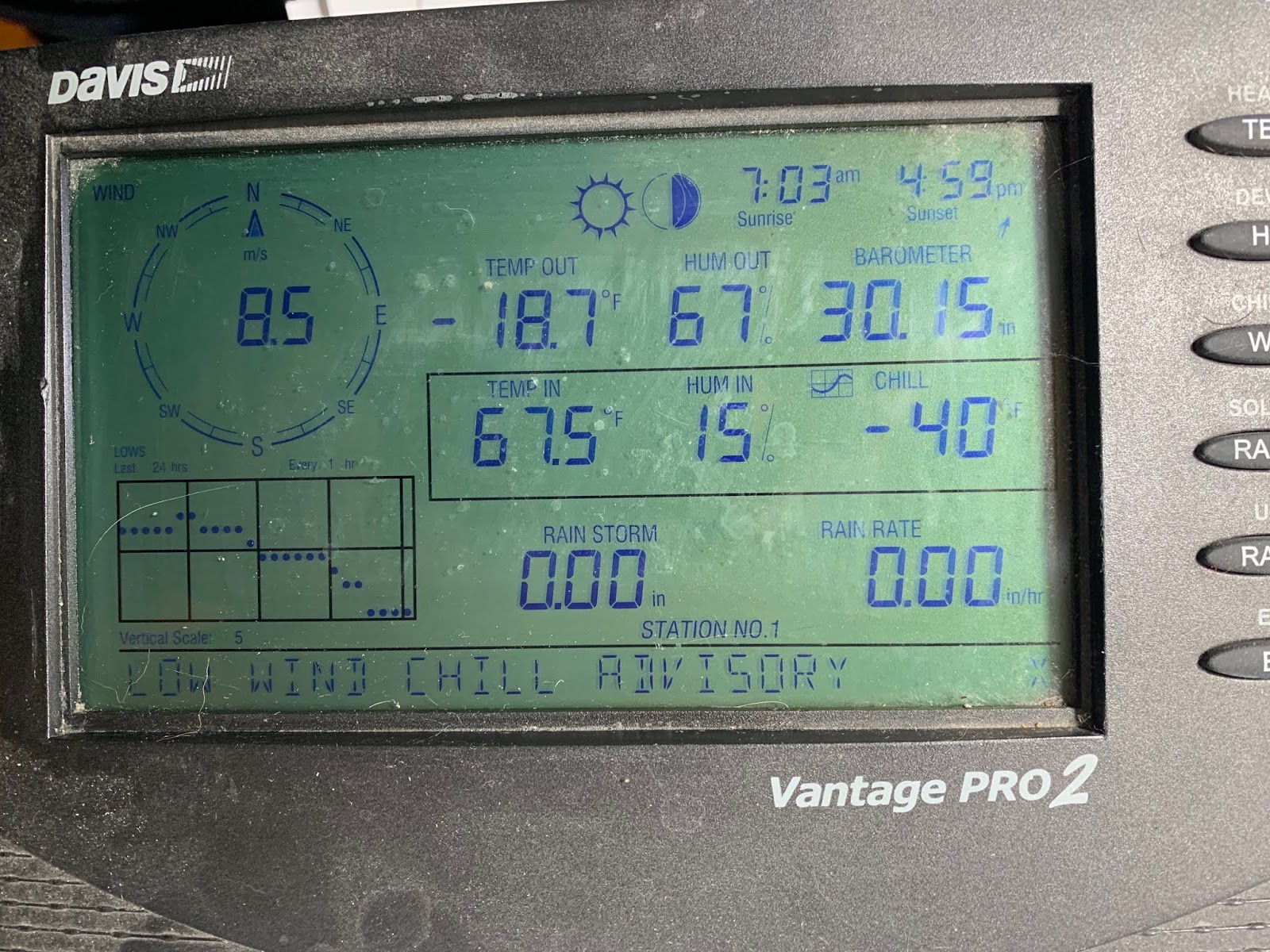 In the past hour it has fallen 3 degrees. No wind to speak of yet.

Got a real fire going in the woodstove and the temp inside is 72F.

If it gets as cold (and as windy) as the weather-guessers forecast, then short of an emergency I ain’t leavin’ the house tomorrow.

So the City of Chicago has, for many years, been telling people to “Take Public Transportation” in order to reduce downtown congestion and ease the lack of parking…

And many people have become entirely dependent on Public Transportation.

Then, when it is going to be dangerously cold, the city has announce that, due to the weather, they will be running METRA  and South Shore commuter trains at a “reduced service level”. and the CTA busses will be on a reduced level as well…

Yeah, just what people want to do…try to stay warm in an unheated bus stop shelter or on a METRA station in -25 F cold with -50 wind chills while waiting an extra time  for a ride….

Best way to get people to ditch those cars and use public transport…(and then there are those who need transport, can’t, for whatever reason, afford a car)…Let those people down on the worst weather day in a decade….
If ever there was a good reason to not trust ever growing Government, to distrust and never depend on the State….here is a good example.