I stole it it from The Feral Irishman 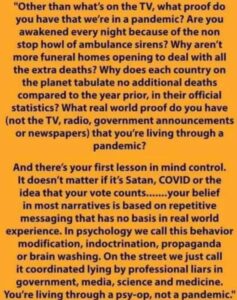 Putting them in jail for trespassing

A lot better deal than just letting them go somewhere in the interior of the US without even a health check.

Gov Abbott of Texas signed an executive order preventing “Ground Transportation” of potentially infected migrants (should be illegals) into communities within the state.

I am not sure if he can really enforce it against the Feds, but it is a nice try.

Remember last year, when part of the excuse for forcing everyone to wear a mask was that the Coronavirus-19 was terribly contagious and dangerous and was even more contagious than the common cold? More than the flu?

Now we are told that this new strain, the Delta strain is even more contagious than the Common cold or even the flu….and also that it might make people even sicker…..

Of course, they are also claiming in the article that this is causing a rapid increase in cases and deaths…but the numbers tell a different story…..our case count is still lower than it has been in a year, and deaths are lower than they have been since the start of the outbreak.

So are the healthcare spokespersons lying, or the media lying….or both. Further, since the original coronavirus was supposed to be incredibly contagious, and now we have the NEW! Improved! Even MORE Contagious! version …were they lying then, or are they lying now? Or is it just a fearmongering tactic since they can’t seem to get the other half of the country (myself included) to take the covid treatment.??

You can expect folks to believe you until they find out that the First time you cried WOLF! you lied…Seems to me that there was lesson like that in some stories the parents told me when I was a ci…..and the Media and the CDC never learned.

I’m still waiting for my apology Fauci and the  the CDC for their original prediction of 4.6 Million dead…based on really BAD data and a really bad model….and they haven’t apologized for that nor their other bad predictions. Instead we get NEW! Improved! Bad Predictions. of the same old repeat of the same old fear lines.

If you aren’t strong enough to deal with the stress of competition, especially the level of competition found in the Olympics, then you should not go to the Olympics as a competitor. Let someone else go in your stead.

(More of an observation, really)

The Customs and Border Patrol folks have been rounding up illegal border crossers (that is undocumented migrants in Liberal-Speak) at the southern border….and shipping them via bus and airplane to cities all throughout the US….these people get no quarantine and no Covid test of any kind before boarding their transportation into the interior of the US….and, of course, no “vaccine” either.

Has anyone tracked the “outbreak” of new Covid cases vs the areas where these untested illegal aliens are being placed?

I tried and could not easily find data to correlate the two.

ETA: And yes, it is happening.

How many people did they infect? Is this where the rise in cases are coming from? Part of the answer?

Ever notice that Pro Covid Treatment advocates  don’t really come up with logical reasons to take vaccines when trying to convince others to get the shot?

They don’t try to convince people to get the shot with logic….nor do they use facts to refute the (valid) arguments against getting the shot…instead they deride and insult.

One might think they have no real argument…at least that has always been my observation when people can’t do anything but insult and ridicule.  Seldom, if ever, do they have a cogent argument based on fact when that is their tactic.

But that is generally a liberal tactic when faced with facts they don’t like, innit?

Seems that despite the hype and hysteria and hyperbole, there was no Sedition on Jan 6, 2021.

And the DOJ h as admitted that fact.

They have tried and tried, and they can’t find anyone that they can get the Sedition charge to stick to…all they really have is a bunch of scared legislators demanding action against a bunch of pissed off people who assumed that “Peaceful Protest” was ok based on the lack of prosecutions of people the previous summer…even those protests where groups broke into other Federal offices.

I mean, we’d have Kamala as President…..Kneepads and all.

I expected that this would have happened about two months hat, but I do expect that it will happen that Joe’s cognitive issues will show up more and more….for sure it will become an issue by the end of 2021.

Perhaps even this is the reason for the renewed Covid panic mongering.

The Covid infections are rising…..or so they say. Most government (State, Local and Federal) are NOT giving us data, just percentages now….Which makes me suspicious.

A “200 percent rise” in cases might mean from 2 to 4, or 100 to 200, but without any numerical data one cannot ell if that rise is serious or not….and theya ren’t giving us the data. The media makes it sound scary, but, again, no hard data.

I am suspicious, truly. The TV news implies that this is a greater danger and that the hospitals are more full than the way thins were a year ago….which is pretty hard to believe.

Plus, there is this…(not that it is news, the news is that they are now more or less admitting it)….anyone who bothered to try and learn knew that the testing was pretty much a useless thing the way they were using the test and the number of cycles they were running….But those of us who said so a year ago  were shouted down.

So what is the goal of this new propaganda campaign ?