So it would seem that in Nevada, they are still gonna use machines to count the votes, but will also hand count ’em to make sure there are no…..Shennanigans, shall we say.

We used to have ballots that we filled out here in Indiana….that were counted by a machine, but which were also batch audited by hand…Now we don’t even get a ballot we can verify, much less one that can be verified after machine counting.

Odd how that changed shortly after Trump won in his landslide, innit? Before that, we all trusted our elections.

Below is the best photo I could get of the cam on the TSIO-520NB engine.

While not the best photo, if you look closely there are three different colors of metal showing, and some galling.

This was taken through the hole where the cylinder belongs. 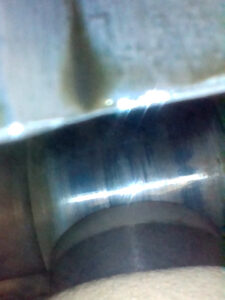 Parts are not available for it at this time. Ram engines will not release a replacement cam to other builders (who do have cylinders) and they claim that they do not have the cylinders to do a rebuild. We are looking at possibly doing an IRAN instead, and are awaiting a quote from Ram Engines.

On the other hand, the rest of the annual inspection is going well so far.

Another date from the future in the movies

Spent a big part of Saturday lifting wood (not a euphemism).

I moved about 2-1/2 tons of firewood into the basement. Oddly, my neighbor who lives on the right side of me (the industrious one) was also preparing his wood supply for winter….. (The guy on the left side of me won’t bother until winter and then likely won’t have enough, but he barely has the foresight to tuck it in before zipping up…come February he will be asking if I will give him some dry wood. Like every year, I will say “nope”). I’d have moved more, but I gotta stack what I got first to make room for the rest I have a pile 7 ft high and about 12 across to stack in the next week or so.

Anyway, the two of us each moved about 1/2 of our supply of seasoned firewood to the ready positions. We will be warm and happy when winter comes. Plus we each got a fair bit of exercise.

At least one person who reads and comment here might be able to benefit from the advice my grandfather (Dad’s Dad) gave to me about 50 years ago:

So I had contacted Penn Yan Aero for a quote for a rebuilt engine when getting other quotes. Got this reply a bit before noon today:

Thank you for contacting Penn Yan Aero for your engine needs. Unfortunately due to a lack of parts and cylinder availability lead times are currently longer than 1 year making price quoting impossible at this time.
Thank you

So the parts issue is everywhere, even amongst the (arguably) best airplane engine service folks in the world.

Thanks, everyone, for your suggestion, but I had already contacted them. Either way they can’t help me in a timeframe that I can accept, so I am looking for other avenues.

Seems that Brandon and his people have broken nearly everything in this country, doesn’t it?

When a wild animal approaches,,. be wary.

Notice she didn’t want to hurt it until she had no choice. Then she got serious.

If a wild animal approaches a human there is a reason. Probably not to make friends.

So it is annual time for the 340A. Most of the inspection has gone well no (so far) issues with the airframe or controls or wiring…..

The engine inspection was bad. Very, Very Bad. I expected a bad cylinder, possibly two. I was not disappointed. But when we pulled the first cylinder and inspected the innards of the engine we found a badly worn camshaft. The oil analysis had told us at the last oil change that there was something wearing badly, and it was correct (surprisingly so). The camshaft had worn beyond the surface hardening, and is pretty badly worn. Engine failure will be very soon.

The worst part? At LEAST 120 days for a repair of the engine. Ram Engines (the folks who made this engine (Continental TSIO-520NB) is backed up for AT LEAST 6 months, more like 8 (according to them). A local (very good) engine shop is sure that they can do it in approximately 120 days.

2 years ago the wait time was 15-30 days.  Now it is much greater. “Supply Chain Disruptions” is all that they will say as a reason.

But I won’t have the plane for at least 4 months. 4 MONTHS.

But at least it will give me time to work on my Commercial rating.

I don’t wanna know what this is gonna cost me though.

As long as they make sure that all the energy used to power these electric vehicles either comes from Wind or Solar (or other “Renewables”) and is produced ONLY in the state of California.

California to ban the sale of Internal Combustion Vehicles by 2035

No imported power, especially not power from other states that is produced by coal or natural gas, or anything that is burned. It all must be Carbon Free.

Otherwise, it is hypocritical and a lie. Burning carbon somewhere else rather than in that state is just leaving the “pollution” to someone else to deal with. And if you allow those cars to use “dirty” power to charge, then you aren’t meeting the stated goal of “zero-polluting cars and light-duty trucks” and “leave(ing) this planet better for future generations”.