Those poor bastards in the Indianapolis began their ordeal.

Forgotten by their command, they floated for 4 days in the Pacific after being torpedoed on their way from Guam to the Phillipines…No one was looking for ’em….A LOT of people failed the men of the Indianapolis that day and the next…

No one was even looking for them. Found by accident .

Seriously, at least a piece of it.

or so it appears.

Seems that a piece of what appears to be a 777 (and there is only one missing) wing or flap washed up on the shore of Reunion Island….But how long ago it washed up no one knows.

It is, at least, something to go on.

Maybe, at long last, someone will know, for sure, what happened. Maybe the rest of the wreck can be found.

Well, not really…… But it IS finished.

Red/White/Blue because …’Merica! And I felt like it. Colors ain’t gonna make it shoot any better, I know, but since I was building it…….and it didn’t cost more or anything…

The assembly will live, for now at least, in a surplus to needs Hogue stock that I had laying around (until I find a decent adjustable stock). I trimmed the stock to free float the barrel. You can pass a bill all the way to the Vee block. 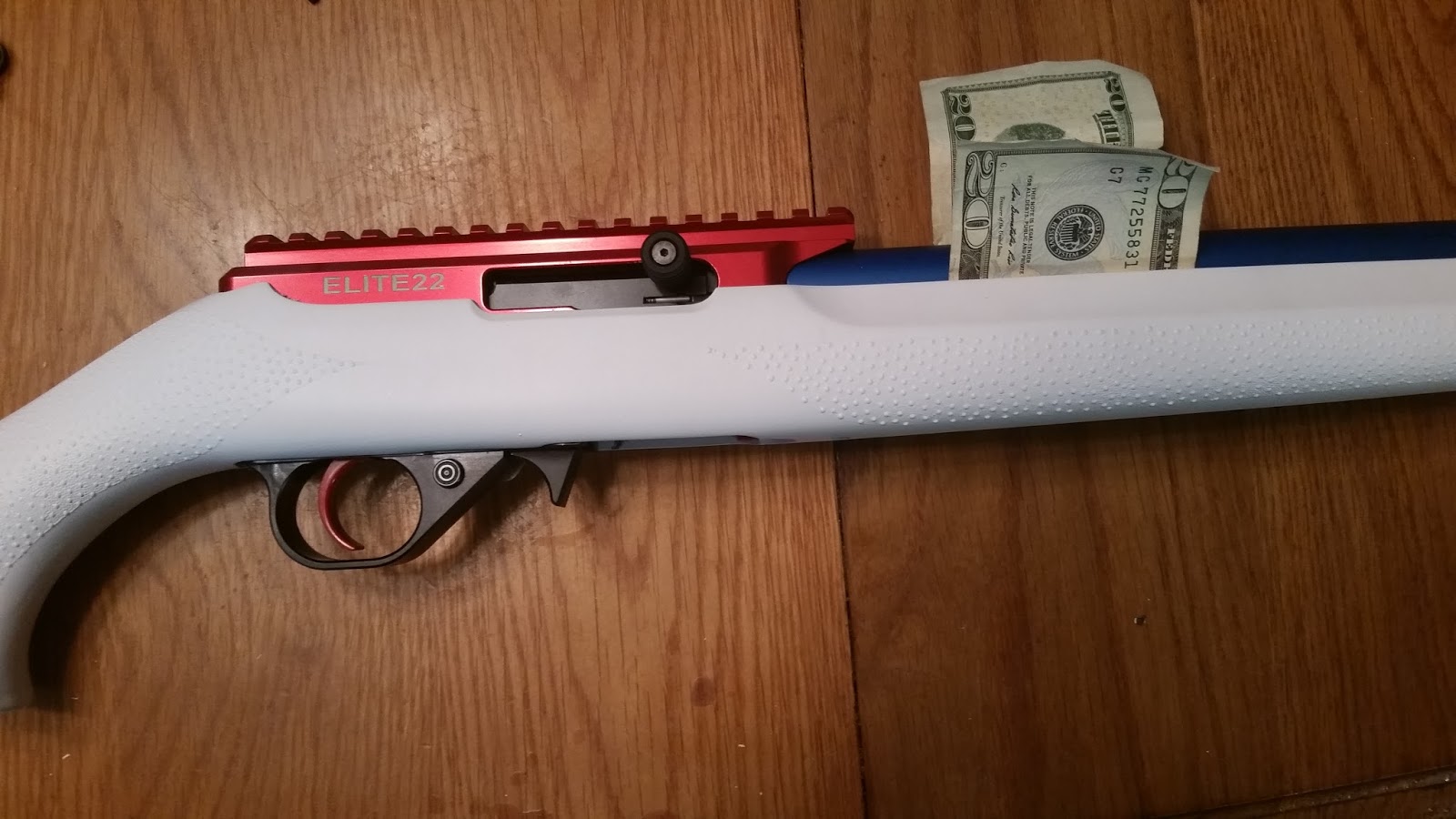 And it will wear, for now at least, a 4-12 x 50 Tasco that I also had laying around. There will be an upgrade in the future, but I’m gonna have to save my pennies for a while to find the right glass for this rifle. (and there isn’t anything wrong with the Tasco….it is a decent scope that has served me well in the past…..it is likely older than some of my readers)

This assembly was not entirely drop in. There were issues with tolerance stacking, but I have to say that Tactical Innovations went out of their way to help. So did Whistle Pig. (Kidd was just sure that their trigger wasn’t at fault and blamed everyone else…..) I had light strikes on the rims resulting in unreliable ignition, which turned out to be a bit of tolerance stacking.  But once that was solved (with help from Tactical Innovations who went out of their way to make things work for me) everything else went smoothly.

The receiver is a well machined piece of metal.

The barrel is a work of art.Very light too. I chose not to get one with a threaded end for a silencer, because that combination of color and flutes and threaded end wasn’t stock….but Whistle Pig did say they would make one for me for a reasonable price….

The trigger is great. Not cheap, Expensive, in fact… but worth the cost…

Total weight is 5.6 lbs…but 2 lbs of that is the Hogue stock.

This weekend is busy, but I should get it to the range soon .

Other parts I used:

Kidd Vee block (and screws), Nicely machined piece. Much higher quality than others I have seen.
Kidd polished trigger pins. (these fit perfectly. If you warm them up in your hand, they won’t go in.)
Kidd bolt handle/return spring. (IMO the best on the market).

American National Firearms bolt buffer. These never seem to wear out. I have one in a rifle that has over 23,000 rounds through it and there is zero appreciable wear on either the pin OR the bolt.

Now if I could only find decent aftermarket mags, then I can have an entirely Non Ruger 10-22.

I think I will call it Captain America

(And I paid for everything, so the FTC can go eat a large block of cheese)

Only my attitude is less productive.

Straps, that is. When hauling crates or equipment on a flatbed trailer, you can NEVER have too many straps in your truck….and (up to a point) there is no way to have too many tieing your load down tightly.

Hauled a three point backhoe from Chicago to my home. 3 ratchet straps over the top holding the crate down tightly to the trailer.

One each fore and aft to keep it from sliding back and forth front to back or side to side.

so that was 4 straps.

After about a mile down the road, two to keep the cover from billowing.

When I was strapping the thing down, the guys at the warehouse/freight yard said I was overdoing it.

Then I went from 70 to 10 in about a hundred feet when there was a wreck in front of the guy in front of me.

Glad I had those extra straps. 2000 lbs (not that much unless it breaks loose) would have made my day when it hit me in the back.

So it seems that the South African shooting team and the New Zealand shooting team (coming to shoot at Camp Perry) both had their match competition ammo hijacked stolen confiscated at the point of entry  (they should have hand carried it through Mexico and across the border, then no one in our government would have cared or noticed).

So what happens? Shooters here in the US step up and collect components, presses and build loading benches so that these sportsmen can load their flavor of ammo and compete on an even field with the others.  Kudos to them, and to the companies that donated.

Unlike the assholes in Customs and Border Patrol. And their bosses. And ultimately, Barry.

Seems that the FedGov Healthcare database was hacked…

And no one heard about it on the MSM.

Busy, for a day off.

The Non-Ruger 10-22 rifle is languishing, waiting to be finished.

Best laid plans and all that. Mayhaps I will get to it tomorrow.

Mebbe not. Shall see what happens.

And I freely admit that my knowledge of advance trauma care is …..limited. Maybe nonexistent, really. And having posted this, I am likely going to get to find out what kind of gravy goes best with shoe leather…..

But I can’t help but wonder about the actions and decisions of the EMT’s as seen from the outside at a distance….Yeah, I am armchair quarterbacking here, and all that….

Here’s the thing: I live near an area that the EMT folks use to land the LifeFlight helicopters and  to transfer patients.

So, today, about a mile from this area, there is a Motorcycle vs Truck accident, with predictable results.

Now, the ambulance picked up the motorcycle rider, and brought him to the transfer area. Where they sat for approximately 15 minutes waiting on the chopper.

The copter landed, and still, the victim was in the ambulance for another 40 minutes I assume they were trying to stabilize him or stop bleeding long enough to get him to better care.

However:
When you add in at least 15 minutes flying time to a trauma center in either Chicago or South Bend (likely Chicago is better, and closer by a minute or two and that was the direction the chopper flew off towards)…..you are at, with the time spent in the ambulance on the ground while the chopper is waiting, at or beyond what it would take to drive to said hospital (Ferinstance, *I* can get to the trauma center in Chicago (Northwestern Memorial), in “normal” traffic, in 45 minutes, maybe 55 if traffic is heavy….and I don’t have red lights and a siren.

Now, I don’t know if the EMT’s can do more sitting still than they can in a moving ambulance, but time from pickup to hospital had to be, including while the chopper waited on the ground, at least at least an hour and 10 minutes….which is actually MORE than what it would have taken to ‘Scoop and Run” to the Trauma Center by road. Remember, road time is 45-55 minutes in my personal vehicle, no lights, no siren, etc. There is a “Normal” hospital with an emergency room less than 15 minutes away by car …likely about 10 minutes by ambulance….maybe a minute or two less. One would think that they would have brought him to a nearby emergency room, stabilized him there, then, if need be, transported him via chopper from hospital to hospital. In the time the ambulance was waiting for the chopper to arrive, (not the time the chopper waited on the patient to be moved from the ambulance) he could have been in an emergency room….perhaps not a Trauma Center, but a much better equipped facility than the back of an ambulance.

Again, I don’t know if sitting still allows the EMT folks to do more than what they could do moving…if so, then the ground hold maybe makes sense. If not, them there was no real reason for the Chopper that I can see. .

I just don’t understand the concept of hurry up and then wait…..then Wait and Hurry up! If you need the chopper, then I would assume time is of the essence….And if it isn’t, then why call the chopper to begin with?

Again, I may be doing the EMT’s, professional that they are, a disservice by questioning their actions. If so, I will apologize in advance. Perhaps there were unforeseen circumstances that changed things as the situation unfolded.

But it really doesn’t make sense from the outside.

Where were you? The first time a man set foot on another celestial body.

My, those men had balls that clanked,

And Our nation, one of the youngest, helped put them there.

Using Feet and Inches and Miles and Pounds, not the metric system.