Robert Langham has (again) the story of the Alamo.

Heroes they were. Remember them and their spirit…..Guts.

If the “Sequester” is going to furlough tens of thousands of policemen, FBI agents and other law enforcement officers (according to his Greatness, the O, even though he is either wrong or lying), then really, isn’t disarming the peasants law abiding citizenry a bad idea?

Who is going to keep a lid on rampaging Democrats criminals?

Who is going to deal with all those thugs when the police are furloughed?

If it doesn’t affect you, you aren’t anyone I’d ever like to meet.

The Para is finally what I would call reliable.

500 rounds, no cleaning, and zero failures that were not ammo related (2 dud primers and one missing primer on the reloads, and an oversized. badly crimped/mutant load on the factory ammo.

I am glad that this pistol has passed the test. I can comfortably carry it with reasonable assurance the not only will it go bang when I need it to, but that it won’t jam or fail in another way.

It is just a shame that it took 3 tries with Para to get it right.

DO you test your carry gun to see if it will work in less than perfect conditions? Will it work when you need it to? Can it go hundreds of rounds without a failure?

Are you sure enough that you will stake your life on it?

It all began 20 years ago today.

The ATF cowboys, in what was essentially a media stunt, began the broughaha which ended in the deaths of 67 men, women and children.

All so that the ATF could have it’s publicity.

Look into the stupidity, the incompetency, and foolishness which led to this mess. Take a few minutes and learn.

Think the ATF is any better today? Any policing agency? Think LA and Chris Dorner.

Say a prayer for those 67 souls whose fate was determined, beginning 20 years ago.

And remember: Next time it could be you or me.

Or any group that “The Government” doesn’t approve of.

Guntersville authorities would confiscate guns of “unruly” individuals during disasters.

She must be getting advice from the Obama administration.

Just to keep the rest from pulling a stupid stunt like THIS.

Much like we will supposedly have to shut down the USDA meat inspectors(and therefore the meat packing plants) because it is more effective as a terror tactic to do so than to furlough the management staff.

Same with the Air Traffic Controllers. Or the FAA. Or the parks. Or other departments.

The Obama administration, congress and the rest of the government would rather shut down “essential services” than cut spending.

We should throw them all out. Time for the pitchforks and the ropes and a map of handy lampposts.

They think cuts and such are beneath their dignity? How much dignity will you have when the torches and ropes come out?

If they can’t cut spending to prove a point, or to get their way, then they have abrogated their oath as senators, congressmen, and president. At which time we need to toss ’em out. With prejudice if need be. 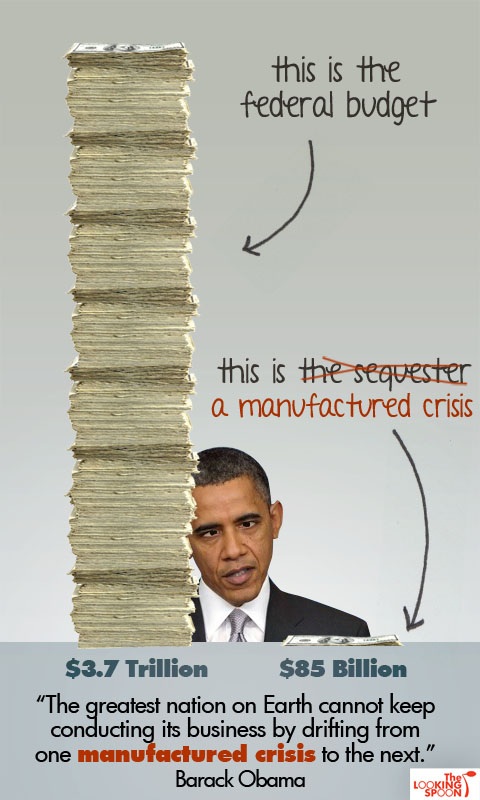 Perhaps this is why they can’t find any cuts that will work….

I am a fan of Sig-Sauer pistols. Currently I own a 250 in 9mm, a 238, a 938 and a 1911-22. I own many other makes and brands as well. I purchase 3-5 firearms per year.
As you are no doubt aware, the State of New York has passed new laws which drastically limit the types of firearms which law abiding citizens of that state can purchase, and greatly restrict their freedoms. There is a boycott underway of firearms manufacturers and suppliers which limits sales to law enforcement to those items which can be purchased and possessed by  every citizens of the state.
I strongly urge you to join this boycott of sales to NY state, county and local law enforcement personnel of firearms which would be illegal for non law enforcement citizens to own.
I realize that there is a large market for not only firearms, but also parts and services supplied to these law enforcement departments, but I urge you to consider the restrictions placed on the other market, the citizens of the state who also purchase your products.
Take a stand. Announce that you will not continue to seek contracts to supply firearms or magazines to law enforcement in the state of New York which cannot be purchased nor owned by any common citizen. Join the boycott.
It would be a shame for me to not be able to purchase, for reasons of principle, any more Sig-Sauer firearms.
Sincerely
This was sent to Sig-Sauer.
SIG Sauer

(I don’t own any S+W firearms, but if you do, you might want to send them a letter:

S&W
And then there is GLOCK. Again, I don’t own any, but they will, along with S+W, be getting a letter.

Glock
H/T to Greylocke for the addresses and such

They’ll give up another of your rights, all to “get along”.

Registration is a step towards confiscation. Ask the Germans prior to WWII.

The GOP will not even bother to get something else in the negotiation as they give away our gun rights.

You stupid bastards need to stand fast and say “HELL NO”.

If you have to negotiate, then get something in return. Say a repeal of GCA 1968.  Something.

Don’t just roll onto your back and spread your legs, Senators. Fight.