Skip to primary content
Skip to secondary content
So I get the call about 5 pm last night.

“The range won’t shut off”.

See, there is a neat relay/contactor setup that, when one (or all) of three light switches (left/middle/right)  is turned on, also turns on the air handler and enables the air compressor that turns the target holders. As it had always worked, no one had ever worried.

Until Saturday evening…..when it stopped working correctly. Turn off the lights and the big fan keeps running. Not what is spozed to happen.

As I am the closest member to the range, I get the call.

My first thought was to simply turn off the breaker and wait for another day…. But the breaker that controls the lights and fan also powers the sewage ejection pump and the heater for that small room where the pump is located. (And last time we had issues with the sewer pump, at least one idiot ignored the signs and used the terlet….with messy results)

So I opened the control box, hoping to see something obvious.
No joy.

And, of course, while it appears that (at one time) there was a diagram of some kind for guidance on the door, it fell off or was removed long ago, leaving only the glue behind to mock those who might need it…..

So I had to close contactors one at a time, and follow the wiring (which was really nicely done, it looked like the interior of an Otis Elevator cabinet) and figure out how the thing worked.

And, while it took an hour and a half, I traced the logic and figured which contactor was stuck.
Pried the welded contact apart, and (for now) everything works).
Kinda proud of that diagnosis. Haven’t worked relay logic for over 25 years. But I can still do it. So it is (sorta) fixed….For now.

Simply worn out and pitted contacts. But all the others are worn as well.

Someone is gonna have to replace the contactors ….all 5 of ’em.
And, since there are only 3 of us that have the ability (much less knowledge) it’s gonna fall on us. And since one is pretty much crippled, and the other is nearly 80 years old, it’s gonna be me.

And we are told they just want to come and be in this country…..and live like us and be good productive citizens.
And maybe that is the goal of some of them.

BUT some are criminals. Bad people. Cop killers

Most of the rest just want Free Shit and a less littered (unlike their home) place to live.

Had to cobble up an adapter for the water line yesterday, as some brainiac engineer decided that all new dishwashers should use GARDEN HOSE as the water supply inlet, rather than 3/8 or half inch pipe thread, or compression.

Nothing, it seems, uses precision machining anymore. Rough castings, machined to a minimum, then a rubber(neoprene?) gasket to make the seal.

So on the 26th, I cobbled the water supply line together, and today, I did it right…

Led worklights might not be the pinnacle of invention, but they sure as hell are a good one, and should rank right up there on the list of GoodThings.

You don’t yet know that you need one, but you do.

Jesus H Christ on a Pogo stick….there are 2 lbs of unneeded screws in that door.
Plus the latch is extraordinarily complicated and WAY too heavy for the job it does.

Yes, I am doing my own plane maintenance.

And Cessna wants over $400 for a set of lock cylinders. I gotta talk to a locksmith and see if he can fix ’em.

At least the door locks properly now though.

SO they thought he wasn’t gonna go greet troops in any war zone for Christmas.

But he did anyway.

And for that, he is a terrible person.
Or something.

Bad, Bad Donnie.
There must be something sinister about his actions. Because Trump.

If you are standing a post or on duty today, then I thank you.

If you aren’t, then think about those who are.

‘Twas a nice flight. Smooth at 7500 feet going down. 17 knot tailwind. 149 over the ground. Skies were clear to space and only a light layer of haze at EYE….which DID make finding the airport somewhat difficult.(First time there, so wasn’t sure where, exactly, to look for it) But we found it and overflew at 2500 and then entered the downwind for 21 for a slightly crosswind landing. Not my best, but pretty good. 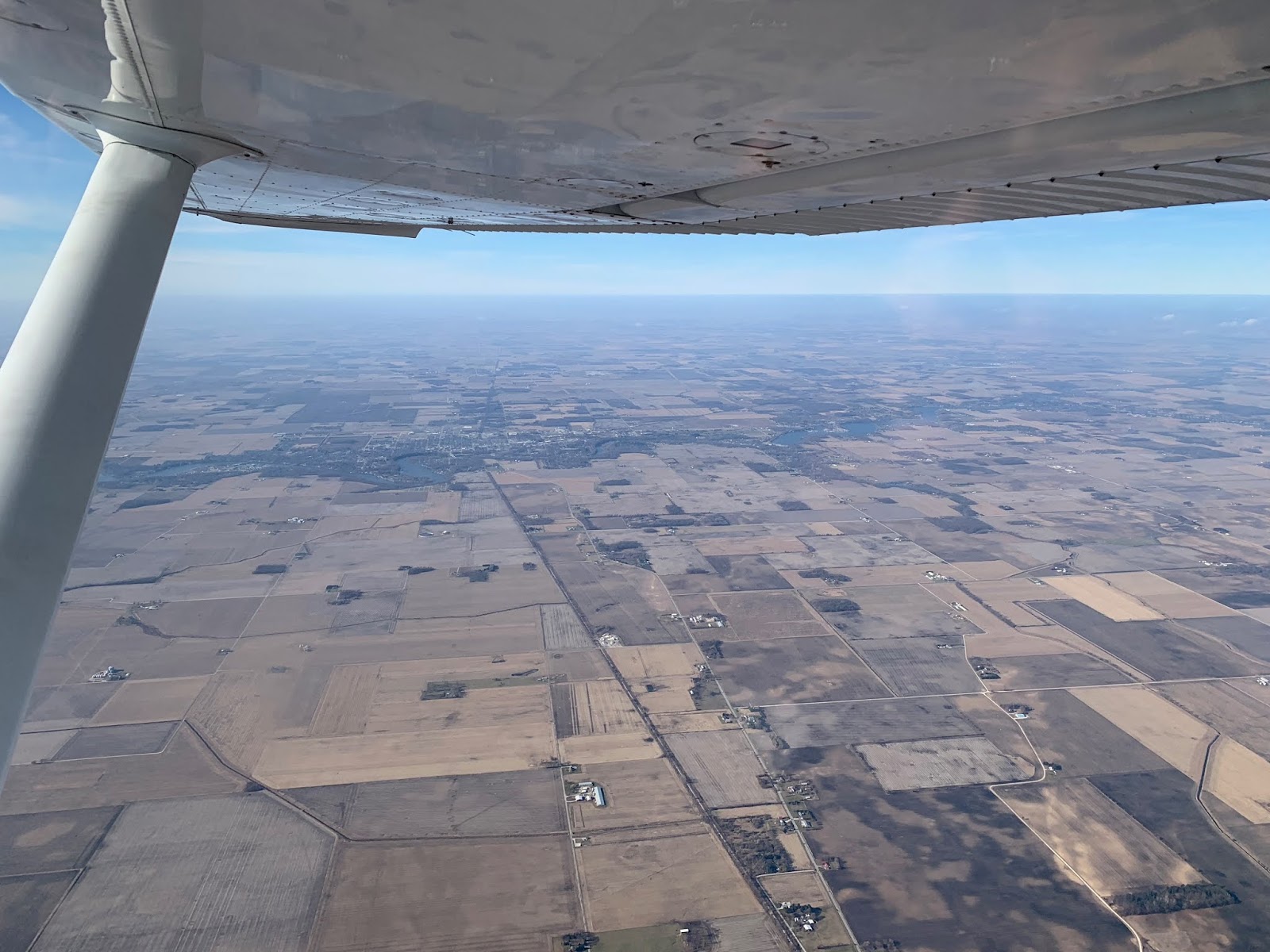 Had a snack at the restaurant (Rick’s Cafe Boatyard) and flew back. The food was excellent.

Flew back at 4500, then asked for 6500. Couldn’t find an altitude that had stable winds, so I couldn’t get a set crab angle nor power setting and trim for altitude. I WORKED flying back. Could have set the autopilot, but needed the practice. Sadly, my altitude and heading were not as steady as they should have been. The wind was constantly changing, so we wandered a bit.

Plus a 20kt+/- headwind. So only 100 knots over the ground. Back at the home airport, did a landing on 27 that was pretty nice, even with the light gusts from the north. Rolled out and taxiied back to the hangar. Filled one side, but left the left tank about 1/3 full so I can run it empty and find out what the gauges read when the tank is actually at and/or nearly holding only air.

So the past few weeks, I have noticed that my Android (Google) phone has some interesting quirks:

I get advertisements based on subjects about which I have texted….and only texted (not spoken) about.

Now, we all know that Google reads your Gmail….I no longer use Gmail for that very reason.

But Texts? And then there is the fact that I believe (and have evidence pointing towards) that they are reading emails from other mail services for which I have apps on my phone.

Scary. I mean, seriously. reading texts as well as email? And getting ads associated with that keyword in less than 15 minutes?

So I bought an IPhone. Lots of changes. Lots different. But I knew that going in. The learning curve will be steep for the next couple of days.

Having said that, it works pretty much the same. But the apps available are not the same, nor are they as well implemented. Things like calculators and levels and weather apps and such are much better implemented on Android (Google) apps than on Apple devices.

Having said that, I will adjust. Apple may well be as bad, but they are at least more discreet about their spying on their customers.

Except that, as far as I can see, no one has presented a budget bill for his signature…..

So, at this point, Trump hasn’t done anything to “Shut the Government Down”. He;s merely said he would, and the House and Senate haven’t gotten their shit together and sent him a bill he could sign or veto.

How can it be his fault when the other parties can’t get their shit together to create a budget?

So, exactly whose fault is it?

Then it failed.  Which was, in part, a Good Thing. Of course, having laid out nearly 3 Large for a transponder just yesterday, the timing could have been better….

The float switch for water level had become intermittent, and then more and more so. From a “didn’t wash because no water” once in 10 times, then to 1 in 5, then one in three, then nearly every time. It didn’t take much, just a little wiggle of the float to make it work. Once it started the cycle, it worked until it cooled down again. No Bueno.

When I pulled the inspection panel off the bottom to see what I might find, I found water. Seems the drain hose had developed a crack. Lucky for me I pulled the panel when I did. No real damage.

The switch assembly for the dishwasher is still available. 171.83 plus shipping.

A new basic dishwasher is 3 times that. Tough call.

I ordered the new one. It’ll be here Wed the 26th.  Faster, stronger, better than the other one. And even more blinky lights to tell me shit I don’t care about…and more cycles! (I only ever use the “Pot Scrubber” cycle, but hey, now I go from 4 cycles to something like 23 cycles: half load/full load/delicates/permanent press/Pots&Pans//normal cycle/glasses/silverware only/extra dirty/heated rinse/heated dry/heated wash and dry/beer glasses/shot glasses/wash and rinse/wash rinse wax// spin dry….whatever…I’m only ever gonna use the one cycle).

Can’t see putting 1/3 the price of a new one into a 9 year old unit. My luck, the pump motor will fail about 10 days later. Or something else on the unit that is also 9 years old.

Handwashing dishes for a few days. I used to wash dishes in an Italian restaurant/Pizza Parlor when I was in high school. I was pretty good at it and pretty fast too…Lets see if I remember how to do it.