Skip to primary content
Skip to secondary content
So a bunch of some folks in the greater Houston area are all upset that prices for food, water, gasoline etc have gone up in price…..Hotel rooms too…..

Fuck That. Pricing for motel rooms has ALWAYS been a market based thing. Trust me, much of the time the property makes very little profit as a motel during the week. Weekend pricing/special event pricing is ALWAYS higher

Gasoline? Ever notice that that pricing varies weekend to weekday and then is even higher on special holidays? Labor day? Memorial day? Independence day? Yep, Market Based Pricing.

Same with some food items.

Same with….surprise! Plywood in an area about to be impacted by a hurricane.

Snow shovels after a blizzard.

No discounts on generators after an ice storm.

But folks are angry because some dude is selling his hotel rooms, in an area where folks are willing to pay a LOT right now for a dry bed and a hot shower, for a higher price. Don’t wanna pay $300 per night for that dry bed and a private room to shower in? Don’t. No one is forcing you to do so. You can stay in a shelter with other displaced folks and be treated like cattle FOR FREE… I will bet that the dude is having to clean rooms himself or pay (or house and feed his staff and their families ) a lot to get staff to clean rooms and operate his motel for those guests.

Or the guy who owns a gas station has decided that his gas is worth $10/gallon. He’s likely having issues with his staff ’cause they are flooded too….But he is open. Hey, it is his gas. Don’t like the price? Don’t buy it.

Bottled water for $75 per case? Go find your own clean drinking water. You could have stockpiled a couple of cases that would be fine (and cheaper) if you’d bother to prep a bit ahead. The store owner has it, and it is his to sell at whatever price he chooses to sell it for. Don’t like the price? Buy it somewhere else. Or next time, learn from this lesson and stock a few cases of water at your home. (Or buy a Berkey water filter so you can purify your own).

Either way, if you need it (or want it, in the case of a motel room or gasoline), and someone has it, then you can either pay their price or choose not to. If their price is too high, then no one will purchase it, and they will have to lower it. IF someone will pay it, then that is the market price. When I own something it is I who chooses at what price to sell it. Not the buyer, and certainly not the Government.

Complaining about “gouging” is just whining because you were too fucking stupid to prep or plan properly.

I cannot understand the thought processes of people who, even when faced with the wrath of Mother Nature (for which they maybe, perhaps, might have tried to prepare a little) Can abandon their pets.

I’d put them down before I would abandon them. Anything else is cruel and heartless. Leave your pet in a flood? At best it drowns quickly.  At worst, it starves slowly. Leaving your pets to this fate is inhumane.

All those who did so are unworthy of their animals love.

So, folks who should have evacuated in Houston and surrounding areas didn’t. Foolish, as we know what hurricanes do in that area, lots of history, so the areas that are now flooded have flooded before. No surprises, really.

Yes, this was pretty serious rain. But.

My question is this: The “Cajun Navy” came to help people stranded and in need of rescue. They are, as far as I can tell composed nearly exclusively of white men. And, as  far as I can see, they are rescuing folks without regard to the color of their skin, gender (real and perceived and identified) economic status, immigration status, etc.

It also appears that the other rescuers are nearly all men, and mostly white.

Where is Black Lives Matter in this? Are they doing any organized effort to help? Or are they only good for violent protests where the cops are held back? Are THEY rescuing anyone? Even Black People? Or is that up to those hated white folks?

Same with Antifa….Are they helping in any way?

Today, I REALLY missed my dog. She’s been gone 5 years and a bit. Yet today, Oddly, for a few very hard minutes, it was like the day she passed.

Sometimes I think I should find another dog. Then there are moments like today, and I dunno.

But not shooting. A couple of us got together and moved some dirt to fix a drainage issue.

Since this was to be a cool and dry day (overcast in the LOW 70’s…in August!) we did a spur of the moment work party. 2 small tractors and a few folks with shovels installing some very much needed drainage conduit.

Fixing the range not only for ourselves, but for others to come.

Plus, it was fun.

But boy, am I sore this morning. I can drive the tractor and the little backhoe ok, but driving the shovel I am not used to anymore.

I was tired when we finished.

As we were packing up, one young member arrived with his 6 year old son to do a bit of shooting. Watching Dad with the kid ringing  6″ gongs at 15 yards with a .22 pistol (the kid was doing about 70% BTW) made the work and the sweat all worthwhile.

So we MUST tear it down or damage it.

Except this was a guy who died 78 years BEFORE the Civil War.  But some jerkwad cut the head off the statue of Colonel Crawford. Even though he wasn’t a Confederate.

“Oops, my bad”. Said no vandal or Leftist ever.

If they find this guy, they should incarcerate him for vandalism, and castrate him so he doesn’t pass his stupidity on to the next generation. 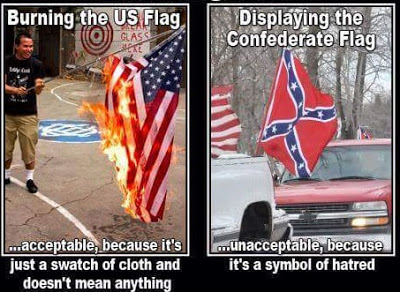 Stolen from Harry (hey, at least I admit that I stole it, ad give credit to the source from which I did….)

I didn’t win the big PowerBall jackpot,  They keep selling me the wrong tickets.

Instead it went to some undeserving soul in Massachusetts…..

Who I congratulate, BTW. Lucky bastard.

Seems that (again) a Federal jury has failed to do the governments bidding convict some of the Bundy protesters  that were at the Bundy Ranch Standoff.

They tried to convict, and even had their pet Judge give instructions regarding testimony that prevented a great deal of evidence.

Seems the jury saw through that.  They chose not to convict on most charges despite the judge suppressing exculpatory testimony and other evidence.


So why do the Federal Officers get to brandish firearms towards a crowd, but the crowd doesn’t get to brandish back? (I think you should NEVER point a firearms at anyone you are’t immediately ready to shoot dead right there, mind you) but there was a great deal of video, and I spoke to people I trust who were there, that claim the Federal contractors in Federal uniforms did the pointing first. Why aren’t they on trial as well?


Anyway, they have lost twice, but the Feds have a great deal of money and a lot of attorneys and I would bet that they will try again until they win.


But this is, indeed, a win for the forces of freedom.

Read this.…if you use Android or Google services. You might be surprised.

I had most activity turned off, but still….

Amazing how much Google knows about you. And kinda scary.

Thanks to Commander Zero


(is there another way that they do things in other countries to give credit instead of stealing content?….are customs different south of the equator?)