The guy who wanted to blow up the pentagon, who is a muslim, is being shielded by the MSM..

Look, I really don’t care what your motivation for death, dismemberment, etc. is. If you want to use terror tactics to disrupt peoples lives, then you and I have a problem. You automatically become my enemy. If you wish to harm my fellow citizens, then I am your enemy….

But really, why downplay his motivation…Why downplay his religion? (and by the same token, they shouldn’t make a big deal about it either) But the MSM and the liberals (but I repeat myself) do their best to make a big deal when a person who may be choosing violence as his means of protest against our government is associated with a right leaning organization..say a Militia or the NRA or something like that. They did their best to portray Jared Laughner as a right wing gun nut when he shot Gabby Giffords and others a few months ago. They play up any right wing association they can (or if they are, god forbid, a christian or a conservative) but they downplay an attachment to a third century religion….almost as if they wish to hide the fact.

A prudent man foresees the difficulties and prepares for them; The simpleton goes blindly on and suffers the consequences. Proverbs 22:3

But somehow, for some reason, the papers and other news media fail to report on things like this, except when it is a man of middle eastern extraction or a bunch of country folks who might be in a “militia”….

One would wonder about the details though…. Was he really a wannabe terrorist, or was this another game by the Fumbling Bunch of Idiots where they talked themselves into this and just kinda gathered him up in the rush?

So, not content with letting criminals purchase firearms and failing to surveil them as they cross the border in order to make the claim of “80% of guns used in crimes in Mexico come from the US” as a vehicle to greater gun control measures……The US government purchased and gave away firearms using your money…for the same end!

Were I to do the same, I’d be participating in a “straw purchase”…Which would lead me to the pokey, the graybar hotel….I’d get a vacation at the expense of the taxpayers…, and bring me a very large fine. But I guess when government agents conspire to do so, it must be ok.

How in any way is it that this is not a scandal on the front pages of the papers, and in the nightly news? How is it that these agents who participated in this debacle are still working as federal agents? WHY AREN’T PEOPLE UNDER INDICTMENT OR IN JAIL?

We have federal agents BREAKING THE LAW and not even gaining anything, not even trying to catch people. The whole set of actions obviously not to stop lawbreakers but rather to perpetrate a fraud in the court of public opinion.

And their actions have caused the deaths of at least one federal agent and, reportedly, nearly a hundred Mexican civilians….Why are these agents involved in the cluster-fuck not charged with conspiracy to commit murder?

Why do federal agents get a pass on criminal actions which would land each of the rest of us in prison?

Why is this not a  “Watergate”?

If you are living under a rock and aren’t familiar with the story of  “Operation Fast and Furious”, use Google.

and proof that The ‘Won” is in the pocket of the unions.

Some folks succeed, some don’t succeed in society…

Some make good ones, some don’t.

Despite what the Indiana Supreme Court has decided, No one is welcome in my home without an invitation. No one. Not even the po-po.

5-0 wanna enter my home? Get a warrant. State yer probable cause. Or bring friends. Lots of ’em. And expect a lawsuit. A large one. Might even be significant armed resistance.  Best to bring a lunch. We are gonna be here for a while.

You’ll win eventually, ’cause there are more of you than there are of me. But it ain’t gonna be easy.

We need our lawmakers to step up and make the limits clear. To pass a law which upholds the Constitution. ( the previous statement is, IMO, redundant, but nonetheless, true). They need to act NOW.  Before someone gets hurt.

And we need better justices in our courts. Soon. Or a lynching. At least an ass whoopin’.
How can these justices allow this? They are attorneys, right? What are they thinking?

And found at Way up North is: 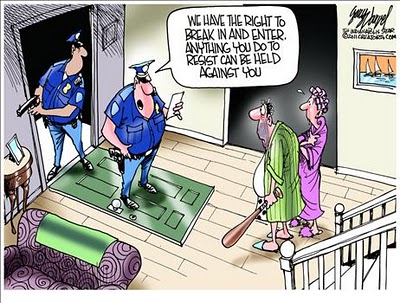 Somehow I can’t see this ruling ever turning out well. For anyone. Either the citizens get screwed, or the cops think that they can do whatever they want….Until they encounter someone who thinks otherwise.

No one wins here…The guard dogs need a leash in order to know when to stop attacking. But the judges have let slip the leash.

You really should read it.