So I got my new Para 3″ carry LDA last week at the gun show and got to shoot it both Wednesday and Sunday.

I gotta say that the firearm is a nice one. A few hundred more rounds and I might begin to think that this thing is carry-worthy. I already have it’s alloy framed brother, and like the LDA  trigger and find that the 3″ 1911 style is great for my carry needs. 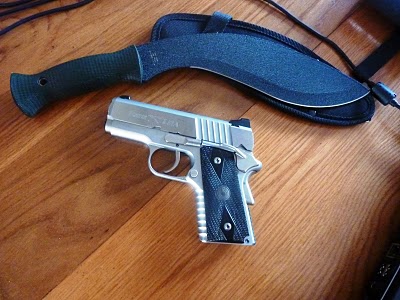 Because this is for carry, I have to have great confidence in this firearm. A failure on the range is, at worst, an inconvenience. A failure of a carry gun, should it happen, can be devastating. I never carry a firearm that has not loaded, fired, and ejected at least 500 rounds with no issues which are not ammo related.

I am well on my way there with this firearm. I have fired 400 rounds through it, including Wed. and Sunday. While it won’t eat 185g semi-wadcutter, It likes ball, and RNL, in either 230g or 200g versions and seems to like hollowpoints (including Gold Dots, my carry cartridge of choice)

This thing shoots, from a rest, 3″ at 50 feet. using a two-had grip, I can shoot 4″ and 6″ single strong hand. It is easy to handle. I was staying on target at 7 yards and floating 3 cases in the air.

I like it. As I said, zero failures for anything even approaching the design of the original cartridge as designed by JMB (PBUH).

Another week or so (if I get off my ass and do some reloading) and I will be sending it off to a ‘smith for the installation of tritium sight.

If you ever have the option of trying the LDA trigger, I would highly recommend it.

If our Democratic politicians had just listened when everyone was crying “Drill, baby, Drill”, back in 2007 as the elections loomed, those wells would likely be coming (or have recently come) online right now….and we would have less concern for the psychotic flailings of a madman... and how his actions affect the price of oil.

No, Not that madman …..Sorry, I mean this madman.

And all to appease a very small minority of our citizens….Just so he could gain 5% more votes.

At what cost to the nation?

Check out the numbers. Follow the links from here and see how much money has been passed around (and back) via the unions…..And now they want more of your money.

I may seriously have to consider thinking about moving to Montana.

You’ll either be interested and go there, or you wont, and you won’t.

We now return you to your previous space-time continuum.

But that’s not what I was talking about…..


They were socialists too….and with similar tactics..

Draw your own conclusions

I kinda find it hard to argue with. And I tried to find an argument with which to refute the claim.

I just have one question:

Do I have enough preps to ride out the trouble?If and when?

If you don’t, and he is right, then you might want to rethink your situation. And change yer prep status accordingly.
’cause if he IS right, and you have no preps…then yer gonna be in a WORLD of hurt.

That things are not going well for the (ahem) “progressives” these days.

And that the tide is turning away from liberalist/socialist/statist ideas in government and those who would push that philosophy on the rest of us. Their message, despite being spun by the sympathetic media is falling on ever deafer and more unsympathetic ears.

It’s not that the people have suddenly changed their mind about such policies, it is that most of the population of this country (many of whom are sheep most of the time), have come to realize just what the agendas and goals are of those politicians and their supporters.

Take the latest example: Wisconsin public unions. The unions (and therefore the members) have demanded outrageous salaries AND benefits. Now where once a government worker accepted lower wages for the wonderful security, insurance, and retirements, Today’s civil service employee expects all the wonderful benefits (the like which is seldom seen in the private sector) AND fully expects a wage which is significantly higher than that of an equivalent private sector employee as well. And, more importantly, they seem to feel that it is their due.

Forget the issues with efficiency and productivity, forget the lack of caring whether the job is done, or done correctly. Forget the issues with accountability for a job done well. The fact is that these folks care little how much of our tax money is spent in order to keep THEIR standard of living at the level it currently is. They care not how much of a burden they place on their fellow citizens, nor do they care if the state (or county/municipality) goes bankrupt, as long as they get their large slice of that meaty pie.

Their main problem today is a lack of support from the masses. Where once they were able to spin things to make their socialist agenda look good, as they were able to spin the message of prosperity and such in order to hide the socialist roots of their philosophy, they can no longer do so. Despite a sympathetic media, and despite support from Mr. O. (the big cheeze himself) public perceptions of the demands of the public sector unions is one of greedy, petulant children. Where once people expected such tactics from any union, and just ignored them, today people are realizing that the unions and their members (not always the same thing) are only concerned with themselves. The tactics of the SEIU and AFSCME and others are DAMAGING to the nation, and can no longer be cloaked in sunlight. The bussing in of thousands and thousands of other union members from other states is a dismal failure. The flight of the bought and paid for Democratic legislators is seen for what it really is, an attempt to stall for time by legislators who received a significant percentage of their campaign funds from unions, money paid for by union dues. Money that ultimately comes to those inflated paychecks from the taxes paid for by Joe citizen…..That guy who is ever burdened by those increasing taxes, and who is happy to have ANY job, much less one with outrageous pay and incredible benefits.

When greater than 70% of the rest of us have either taken cuts in pay, given back benefits or perks, or have little or no job security see this, we are, at best, unsympathetic to these folks. And we will remember those legislators who support such antics by our employees.

And the media is once again showing its true colors. Sticking stubbornly to its old ways of biased, double standard laced coverage of the event, they fail to realize that the internet, by providing a secondary path for information, is slowly eroding their credibility and showing that they are truly no longer news organizations but rather propaganda outlets for the liberal, statist, socialist power blocks. Their credibility is as good as that of “Baghdad Bob”.

This incident, and the ones which are associated with it will cause a change for the better in our society. People will soon expect more from our public employees. And accept less bad behavior from our unions. I think that this is the beginning of the end of the unions. And that will lead, in part, to the end of the Liberals Democrats. Their money will decrease, and therefore their influence. The people, even those who may be sheep, will finally see what has been apparent to many of the rest of us for years. For without the support of the people, the socialist/union/liberal/statists and the groups who are allied with them will fail, they will lose power and become a footnote in history….until they try again.

and try again they will.

“The price of liberty is eternal vigilance”

You should go HERE.

And seriously, swallow your coffee/beverage before reading the comments.

Thank you, Brigid, for alerting me.

it could never happen with Universal Health Care.

“Death panels” and all that….