Dude has a point:

Surprised he hasn’t been shot yet.

Dude livestreaming the unrest in Ferguson gets his phone stolen by another black man….

Hows come they can use that word to describe each other but I can’t.

This is the kind of folks that live in Ferguson. People like Mike Brown. Nice people it seems.

It occurs to me that these people still aren’t satisfied that Officer Wilson was exonerated by the Grand Jury…..

Itt occurs to me that they are guilty of judging the dude when they don’t have any more idea what happened than anyone else. All they see is race. Were white people assuming that a man was automatically guilty just because he was black, that would be racism. But when they do it (in reverse) it is ok.

What these people want is a lynching.

And they are guilty of what they accuse white people of being.

Seems that Julie Bosman is afraid…..People are calling her home, sending her food and generally making her life….interesting.

ANd they are doing it enough that she is calling the police to report that she is afraid and “feels harassed”.

Well, honey, life is a bitch, innit? Now you have just a small bit of what you and your partner gave to Darren Wilson.

Not so pretty, is it? Hope you get enough that you learn a leson.

Interesting double standard there, isn’t it? That behavior was ok for her, and she had to know the hell she was unleashing on Officer Wilson….But when it comes around to her, she isn’t happy.

I wonder if she has a gun? And interesting that she is calling cops (with guns) to protect her……

For a good cause. (you’ve likely read this announcement already, but if ya haven’t….)

So, for Black Dog Friday Weekend The Book of Barkley  is only $2.99 on Kindle and only $4.99 through Christmas and New Years.  ALL of the proceeds, Kindle and paperback, are going to Peanut’s Promise.

Has anyone owned or used one of THESE?

The reviews are good, but I find it hard to believe that:

A: you can get 400 amps through those teeny tiny little battery clamps and cables (much less the connector)

2: you can even GET 400 amps out of a battery pack like that, even dead shorted.

I mean, a huge capacity battery pack like that would be great for traveling to charge the assorted devices we use.  Lots of recharges. 12 AH battery will power a cell fone  for for a long time and all…..

And having a jump starter is never a bad thing.
But the jump starter part seems too good to be true. 400A…even once?

Yet, as I said, the reviews are really really good. Not all of the 375 5-star commenters can be lying or paid shills…..

No, Seriously.  Note this: Hadda wait on Girlfriends EBT card to get supplies.

I mean, how much more stereotypical does it get?

(I chose not to post this until after Thanksgiving was over……)

I mean, if I lie in testimony to a court or in a deposition, am I not committing perjury?

If you read the testimonies in the Mike Brown case, there were quite a few who outright lied….the forensic evidence shows that their testimony was a lie. Some admitted that the “embellished” the parts they witnessed. Others admitted that they weren’t present for much (or any) of the incident.

Now… I have to wonder why no one is (as far as we know) being charged with perjury? Is it just because this is a touchy political and ethnically charged situation?

I mean, some of the testimony accuses Officer Wilson of executing Mr. Brown by shooting him in (depending on the the witness) either in the back as he was running away (with and/or without his hands up) or in the back of the head (one accuser said they witnessed 10 shots!) while he lay on the ground.

I realize that many black people in that neighborhood really hate white people in general (and white COPS specifically)….but this testimony would pout a cop in jail for murder. I realize that the killing of a black 18 year old enrages the black population, and that they would, if they could, lynch the man who did it….for whatever reason. All they see is black and white and cop. They really don’t care why or what the situation that made it happen.

But really, shouldn’t perjury be a crime? Shouldn’t these people be charged with giving a false statement that could, potentially have put Officer Wilson in jail for murder? Shouldn’t they be facing the penalty for perjury? If not, why should anyone ever tell the truth? 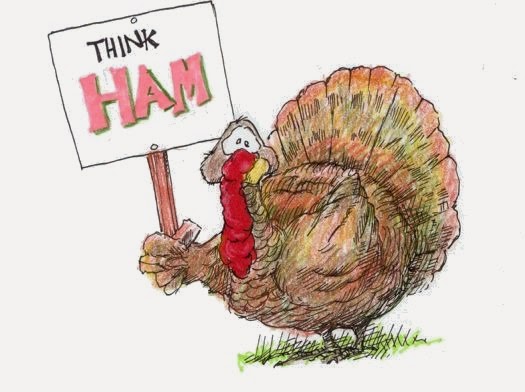 Hope you spend the holiday with friends and family.

Remember the reason this holiday exists.

If you are working far from home at some military base, Then thank you very much. Your service and sacrifice is appreciated.

It occurs to me that the choices Mike Brown (the “Gentle Giant”) made that fateful day were what led up to his demise.

He chose to steal cigars:

He chose to push the shopkeeper around:

He chose to walk down the middle of the street, attracting attention to himself:

He chose NOT to move to the sidewalk when asked by Officer Darren Wilson:

He chose to fight with Officer Wilson:

He chose to ignore the orders to stop:

He chose to turn around and confront Officer Wilson:

He chose to ignore another order to stop and get on the ground:

Witnesses (credible ones) corroborate the story.

He made all those decisions. The result was his death. He could have stopped the chain at any time by making better choices.