How many people were exposed to him on his route from LIBERIA TO TEXAS?

How many on the planes, how many on the public transportation he may ahve used…How many did he pass in the street…..Waiting outside of the emergency room?

Now apparently Ebola isn’t that easy to get. Maybe. But it is not something to ignore. A man came into the United States with it. From literally the other side of the world. Carried a deadly disease. Nothing stopped him from re-entering the country.

Think about the implications there. He flew from a country where the disease is rampant and yet there were no barriers to his entry into this country.

Got facemasks and gloves? Hand sanitizer?

If not, get ’em soon before the rush.

‘Cause if there is a second case found, there won’t be any available.

as part of that conversation, the statement was made to me that “You don’t like cops”.

I was, to be honest, a bit surprised….”But look at what you post!”, they said.

For the record:
I neither like nor dislike cops. I think that they do a really tough job, and some of it is dealing with terribly nasty and ugly people. And for those who DO THEIR JOB WELL (which, for the record, I believe is a majority of cops) I have a great deal of respect.

However, I am very critical of men and women who have life or death powers, who have arrest powers, who can literally shoot you or me and be excused for their actions, who do their job poorly, or who have a bad attitude about those citizens (note: Cops too are citizens) whom they police. I dislike and am critical about policemen (and women, but from this point I will use the all encompassing “Policemen” as representing all genders) who are abusive of the powers they are granted as EMPLOYEES of our society. They are not lords over the rest of us, nor should they be given special treatment just because they are police. In fact, I strongly believe that they should be held to a HIGHER standard of behavior simply because of the job they do and the powers that they are given. Further, should they break laws, they should be punished to a greater level that those other citizens who they police…simply because they have violated the trust we as a society place in them.

I believe that too many policemen are unsuited for the job, being psychologically unable to wield the power they have in a benign manner. Too many are bullies, either as their normal psychological profile or from just plain job fatigue. Either way, cops shouldn’t be, or act like, bullies. I know they train cops today that “If you aren’t in control, you are under control”, but they don’t have to act like assholes in every interaction.

Here is a bit of advice for cops:

I believe that respect is earned, and that unless all police hold each other to a high standard (rather than make excuses for their fellow officers’ bad behavior, as happens so often) that the respect that police officers need and want will never be forthcoming. Also, respect begets respect, and if you knock on a door or come to a car and act like an arrogant ass, you’ll be treated like one more often than not. (and yes, it does work both ways, I understand that…but clamping down hard in every interaction with normal citizens just makes us mad, does not generate fear, and especially does not generate respect) Police men and women need to police their own ranks strenuously FIRST, with as much (if not more) vigor than they do the rest of the society they watch. How I interact with the next cop will likely be a result of how my previous interactions with police went.

Policemen are peace officers….not soldiers. Yes, there are situations which require that they act like soldiers, but not everyday, and not in every encounter. Wanna be treated with respect? Dress like a cop, not door-kicker in a place like Kabul or Falujah. Yes, wear protective gear, but DON”T LOOK LIKE A SOLDIER! LOOK LIKE A COP. Dump the Tactical Tommy look, especially the black uniform with the silver badges…. especially when you are on patrol.  Everyone you meet isn’t planning on killing you. Yes, you need to be careful, but…….

If you are so afraid that each stop you make is going to result in your death that you treat each and every traffic stop as if there were guns poking out of the car windows….then you need to find another profession. Yes, being a cop is dangerous, and you should be careful…and believe it or not, I too want you to come home after every shift to you family safe and sound….but really. Approaching each stop and every citizen you interact with with fear and treating them as if they each were a killer like John Dillinger is both insulting to us and bit frightening as well. Relax a bit. We aren’t all recently escaped from prison. If you are that afraid, then find another job. Seriously.

Remember, the people you interact with aren’t all criminals…. don’t treat everyone you meet like that 3rd time loser you saw yesterday. We aren’t all on drugs, aren’t all thieves, and we aren’t all recently paroled. Yes, I realize that many of the folks you interact with are like that, but not all of us are. Some of us haven’t committed any crimes. Threatening to “run my sheet” just makes me angry, or amused, depending, as I have no “sheet”. Treating me as if I were recently paroled just makes me angry. Threatening me with arrest because I am not compliant enough makes me angry enough to make a complaint.

Remember that pesky Constitution. Yes, it gets in your way sometimes. But it is what stands between US and being a Banana Republic. Respect it. Deal with the limitations if puts upon you and your job. If you can’t accept that, or find it too inconvenient and are willing to ignore it, then you are in the wrong profession.

Be ethical in how you treat people. Yes, I understand that you are busy, and frustrated and tired. I understand that it has been a long week….and that you pulled a double…Still. Treat us well. We are, after all, the folks you chose to serve. Be nice and respectful and professional. It will help with some of us. Don’t cut corners. Here is a hint: If you want us to do something, explain why, if possible. Don’t bark orders. I don’t work for you and am not under your power.  Ask.  Politely.  You’ll find that most of us will cooperate. You can always go to being an asshole, but it is hard to back up from that once you’ve gone there. Try nice first…Remember, we aren’t subject to your orders.

Pay attention to the above, and for those of us that aren’t bad guys or troublemakers, you’ll have a more pleasant interaction, as will we. Less stress for both of us. More respect for you.

Try it. You’ll be pleasantly surprised most of the time.

‘Cause the Secret Service bodyguards who were SUPPOSED to be guarding the white house appeared to be asleep at the switch.

I mean, dude not only climbed the fence (I’ve been there… and if I remember correctly, it isn’t a small nor easily scalable fence) but ran about 75 yards to the **UNLOCKED** doors…..then ran inside and “overpowered” the female Secret Service agent inside the building…..Because SHE wasn’t alerted due to a “Muted” alarm inside the doors…

WTF? Just phoning it in there, folks? My understanding is that there are rooftop snipers on each face of the building…..and even if they are just observers, not snipers, climbing the fence takes time, running 70+ yards takes time…and the door being unlocked? The alarm muted?

Why bother? If you can fail that badly as a team, then really, why bother to even show for work?

Where the dead often are reanimated at election time …

But apparently it is happening everywhere.

Not just Africa, with Ebola victims, but Now Greece as well:

“Cancer victim came back to life”.

Now, this is probably bullshit, but coupled with the other incidents one might begin to wonder. 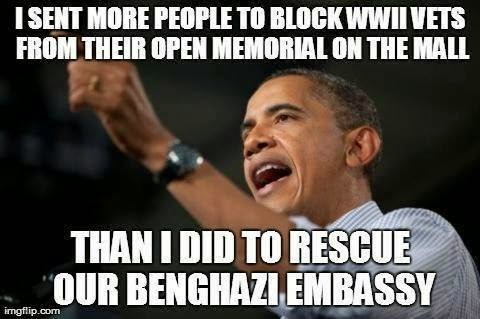 Seems that the guy who attacked his coworkers in Oklahoma (and coincidentally )DECAPITATED a front office worker WAS A RECENTLY CONVERTED MUSLIM who had tried to convert his coworkers….

Now it COULD be that he simply wanted to kill people and  in the doing so accidentally decapitated a woman in the violence attack. Maybe. But I doubt it.

Of course, the press doesn’t seem to be able to show that the guy who ended the attack was a CCW holder, (and where they are admitting it, they are downplaying it heavily and calling his a deputy….He WAS a Reserve Deputy, but was just a CCW holder in a private workplace in this instance)

Your headshots
(but don’t use too much ammo!!! You might need it!)

Ebola patients “Rise from the dead”.

(Not that I think we have to worry, but still….)

and go to Og’s site and give him some support.

He needs it today.

He and Mrs. Og are some tough-as-nails people, but this sort of thing will hurt anyone. My prayers are with them.

You either understand, or you don’t.

It is sad that their lives are so short.

Yesterday was a doozy. A real big one.

Today doesn’t look any better. What with contractors, repairmen, Alarm specialists, Calls to the telephone switch folks, remediation/restoration “specialists”, phone calls to schedule more, (and I still haven’t heard from the insurance adjuster) It was a real fun day.

Today don’t look much better either.

Yes, posting has suffered. Life is like that. Gotta deal with my livelihood first.