and barred from legal work for life.

I’m not wantin’ to start suggesting that a few (unwilling) people died for a cause or anything….

And yet, one must break a few eggs to make an omelette and all that…..

But have you noticed that ever since the push for Gun Control failed a few years back, there hasn’t been any atrocities committed on the National Media by white guys with firearms?

No schools shot up with those terrible mind infecting Black Rifles, nor high capacity magazine “things that go up”, nor 30 round pistol “clips” in those terrible GLOCKSs or anything?

Maybe it has been happening, and we just haven’t been informed by the media?

Or did all those kids in Connecticut and all those folks in the movie theater in Colorado die and get shot and permanently injured by those whacked out kids on psychotropic drugs for no real good reason. Does Gabby Gifford have a permanent brain injury for nothing….?

Were all those folks just (wasted) sacrifices?

‘Cause in case you haven’t noticed, there haven’t been any big splashy ones since the Left gave up trying to take yer guns away.

(But I bet had Hillary been elected there would have been at least two incidents by now….Just to set the stage ….)

So those ObamaCare subsidies?

The ones that Trump was gonna rescind?

Yeah, so much Hot Air.

I’m growing ever more unhappy with Trump. He SHOULD go to a Shutdown if that is what it takes to get his budget…..Wall, and Obamacare and all the other promises he made.

We elected him on those promises, after all. He doesn’t appear to have the spine to even really try.

Apparently he’s gonna approve a bailout of Puerto Rico as well, in order to prevent a standoff with Democrats and a budget shutdown.  I’d like to see that standoff…there is a point wherin one has to take a stand…

He is, I think, getting bad advice from Reince Priebus…..The leader of the previous GOP, who couldn’t stop anything the Light Bringer did…that party of accommodation.

And it is showing in Trumps lack of victories.

Stand up and fight, Mr. Trump!

They claim that repealing ObamaCare is against “International Law”?

Why don’t they take some of their bloated salaries and the profits they make off of the decisions they do at the UN and subsidize those folks they want to protect?

(Of course, they could do a lot with that money in other parts of the world also….)

And we need to make one thing clear to the UN.

They don’t get a say in the laws or operation of the Government of the US. .


If they don’t like that, and cannot understand that, and can’t keep their fingers off of our pie, they are welcome to take their headquarters somewhere else and they can do without our contributions to the UN. (They’d lose better than 20% of their income).

Were I Trump, I’d tell em to take a flying fuck at a rolling donut.

I have found that those surplus blue helmets can be penetrated by a .308 NATO round at a bit over 450 yards. (YMMV).
Just sayin’. 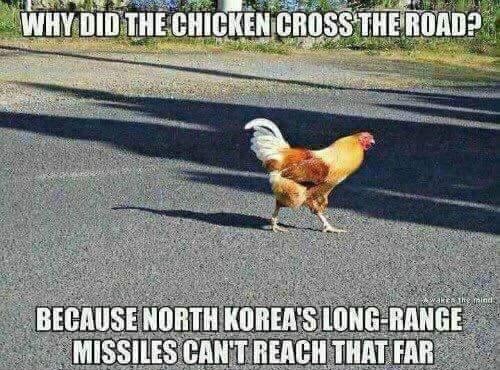 It isn’t the fact that, while conservatives feared Barry Soetoro’s wish to “Fundamentally Change America”, we all sat there and waited for him to make the attempt and then fought him every step of the way, rather than gnashing our teeth and crying and having to take our anxiety meds and have Drum Circles and Two Minute Hates Support Groups and such…..We dealt with things as they came, in a logical and realistic manner rather than stress out over our imagined fears that we projected onto a powerful leader not of our philosophy.

It’s not because their revered Obama didn’t have gaffes and miscues and mistakes in his first few months in office (and later)…..

No, it is, in this article, just because Trump is who he is.
And that, my friends, is all the justification that these folks need to have Trump Derangement Syndrome…..in spades

Well,  my new truck FINALLY got to the Dealership.

And it be nice.

Leather, diesel, RamBox, lots and lots of stuff to be happy about.

Last one lived with me for 14 years….and it still has got a few years of life left.

Seems the entire Senate is to be briefed about something to do with North Korea.

How is yer prep status?

Trump caved on the wall.

Now we are told “Maybe Next Year”.  Trump “Takes the Wall off the table in Budget negotiations“.

I think he ought to sell sponsorships in one foot sections to citizens for $100 each. I bet he could pay for the wall that way.

So now we can add the Wall to the failures and broken promises, along with Repeal. 2 big promises that got him elected are being tossed by the wayside.

So they are taking down another set of Confederate memorials today….

Because when we decide MLK was not who you feel he was, when we decide he becomes irrelevant, when we choose to claim he was racist, or this deeds were hate speech, as this originated at…because some asshole wearing a Black Power patch on his jacket kills a white man, or wearing a Malcom X “X” shoots and kills a bunch of white folks…

You gonna dare to stop us from removing a statue or a bust of MLK?

‘Cause so far, people have been decent and let you get away with trashing their memorials to their heritage. You claim “racist” but those folks were all a hundred or more years ago.

What you mean is that you want to show how much power you have, as black people.

Symbols mean things to people. Just as you claim that that civil war memorial is “racist” and you revere the Statue of Martin Luther King……so does that “Confederate” statue stand for the heritage of the families that built the south.

No, it wasn’t on the backs of the blacks despite what your current version of history might represent….

Learn the truth, deal with the fact that those memorials are there and shut up and find a black person who will do something important enough to be memorialized and then pay for a statue or memorial for that person…..

‘Cause otherwise, someone is gonna start finding ways to denigrate MLK and we will begin finding excuse (like every black on white crime) to rename his streets and parks and then eventually pull down his statues (most of which were paid for by whites as taxpayers).

If y’all keep this up, yo won’t like how it ends,