COngress can’t help Americans, can’t stop the border from being overrun and causing economic damage tot he US economy. Can’t understand how to fix inflation.

But they can give 12 BILLION DOLLARS (which we don’t have, so they are making them out of thin air) to Ukraine…and they wonder where the inflation comes from.

It ain’t gonna apply to those loans that were taken out before 2010.

Apparently the Big Banks didn’t wanna eat all that money.

I think that the entire idea will slowly fade away.

Lawdog has an interesting viewpoint on it.

Can’t say his scenario is unlikely. IN fact, he may well have hit the nail on the head.

Lots of possibilities. This one is more likely than true sabotage or outright blowing the things up by a nation’s military.

Likely we will never know for sure though.

But if I were in Germany, I’d be buying wool socks and blankets right now. Warm jackets too.

And haven’t bugged out…

Then it is almost too late. Bail or hunker down, but at this point, pick one and stick with it.

Of course, if one lives near the coast in Florida, then hurricanes are one of the weather phenomena that you are signing up for. Don’t expect sympathy.

It is sad that the media hypes the hurricanes so much, but not the blizzards and ice storms and other weather events in other parts of the country.. unless, of course, one hits the East Coat…then it is news.

They know that they will get away with their crimes. Even if caught, they’ll be out on (no) bail before dark.

And look at all the “diversity”

And the residents wonder why they end up with “Food Deserts” in their communities.

Oddly, this sort of thing doesn’t happen in other demographics. Why is that?

Not, however this kind of Bacon

Ate Him. Or at least portions of his man bits.

If I were in England, I’d be hoarding cash…..

So they (the banks) plan on blackouts…apparently bad enough that they are buying backup generators.

Of course, all the stores won’t be able to process payment cards without power to the terminals, and the data infrastructure and internet won’t have power to transmit that payment data from the store to the banks. I suppose that wireless can take up some of the slack, but that requires power too….

Without cash, the economy as a whole will grind to a halt pretty fast. I doubt that there is enough cash to supply the need, either.

Oughta be interesting, if they do have long term blackouts.

Seven Million by the end of Biden’s term.

Under Biden, the average is 139,000 illegal immigrants per month.

In and around New York City, a significant surge of 5,000 immigrant children flooded into four counties in a single 11-month span through August 2021, posing a $139 million additional burden on New York taxpayers to educate them.

To put this unprecedented migration in even sharper perspective — consider that over nearly six decades, 12 million legal immigrants were admitted to the US through Ellis Island in New York City’s Hudson Harbor. At its peak, those numbers reached 1,004,756 in 1907, an average of 84,000 legal immigrants a month.

Reread those above numbers. Think about it. Those legal immigrants paid their own way after arriving. Not so much these illegals. 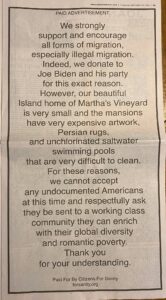 Yep, weakening the integrity of our elections. Removing yet another safeguard. This bodes poorly for our future elections.

In a just world, the DNC and folks like Liz would be tried as traitors.