Not too much of a choice, really.

“In a decarbonized world that is renewable-powered, the land area required to maintain today’s British energy consumption would have to be similar to the area of Britain,”

“This, in turn, had presented the authorities with a choice between continuing to use arable land for wind and solar, or using it for food.”

Essentially, what it comes down to is that if we use all the available land area to place solar panels and windmills, then someone is gonna starve.

Smaller countries are gonna have even bigger issues.

One can have carbon-free renewable energy. Or, one can have enough food to feed the population. You cannot have both using current methods. (and that is with current farming practices using pesticides and chemical fertilizers. If you go “organic” then the numbers are even worse)

Starve, or live in the dark and cold. That is the choice the Greens would have us make.

I guess from their viewpoint, it is. Of course, I find nearly all News Media and the other  censored Social Media to be Far Left, so there is that.

(Of course, had it not been for the censorship of Facebook and Twitter et-Al, there would be no Gab, would there?)

So, if they arrest Trump, what are ya gonna do?

We stood by while NY prosecutors did their best (and are still doing) to destroy the corporation that Trump has….

We stood by while a bunch of misguided patriots have been mistreated and held without bond for their misdemeanors of trying to occupy the Capitol (they called it Insurrection as their excuse to persecute those misguided fools)…yes, we stood by when our Government mistreated our fellow citizens….

Are we gonna stand by and do nothing if the folks in power decide to go even farther and arrest Donald John Trump?

Best decide now. At what point do we choose not to let them go any farther?

Masks are ineffective in preventing transmission of Covid.

Yet nearly every Health Care Professional and “Expert” told us we had to mask in order to prevent the spread.

So either they were parroting what they had been told or they were lying. Either way, their credibility is (again) eroded. At this point why should we believe anything they tell us?

Found at the Feral Irishman‘s place. 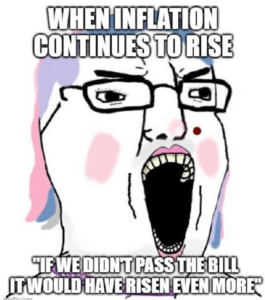 The Media keeps telling us that the FBI “Seized Boxes of Documents” from Trump’s residence.

So what. They apparently also seized a bunch of Melania’s underwear, or at least searched through it.

In neither case does it mean that they FOUND anything. If they had, I am sure that charges would already be laid in order that the Sunday Morning Media actors (not reporters) could trumpet it to everyone.

‘Tis funny though: Hillary had unsecured classified material from her SecState days.(verified and admitted)…and no one cared. (those Double Standards again).

Just ’cause they took something doesn’t mean it was illegal. It is designed to look bad on the news, but I don’t *yet) see any charges laid.

Methinks this is another “all hat no cattle” moment for the DNC.

Seems that, despite the outcry from the Left for Donnie to “release the Warrant” that isn’t what they really wanted.

Seen at a rural Kentucky courthouse while walking the square while travelling yesterday: 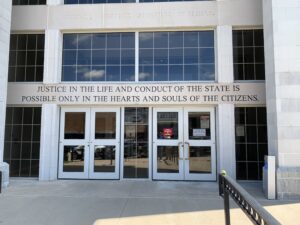 Something the folks in DC have forgotten.

Seems that the IRS is gaining a LOT of new armed officers.

Prior to now, generally, when they raided a home or business they used the US Marshalls service or local Law Enforcement to provide the guns….

But now they have (or will soon have) their own armed agents to do the work.

So will we reduce the number of US Marshalls? I mean, since they no longer need ’em and all.

So Trump’s fundraising is “exploding” after the raid as people choose to support his campaign after the Politically motivated “Raid” on his home.

While many folks who had chosen not to donate to his campaign up til now , they are, apparently angered by the partisan justice and blatant games being played by both the Jan 6th committee and now this heavy handed actions by the DOJ. And his contributions have apparently reached records (for this early in the campaign, anyway)

People can see the partisan and heavy handed actions and where they come from, no matter what label of “Law” they are placed under. The grandstanding, the desire to trash his reputation and the complicity of the press.

The Left must really really fear him running again, especially seeing how well Brandon is thought of by most of the population at this point. I think they know that Trump would win over and above the level of Cheat the DNC folks can apply… And that frightens them badly.