No one could argue with that.

Via the Feral Irishman: 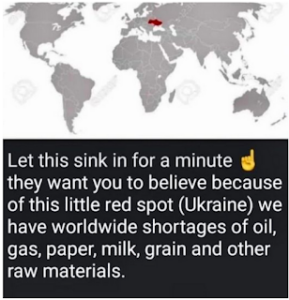 While Ukraine does have a great influence on those markets, and does produce a disproportionate amount of grain and cooking oil for export to other european countries , the statement that it is causing all the shortages is ridiculous.

You can’t hear this, but I and many of my fellow citizens still want to thank you for your sacrifice.

For all too many of the citizens of this country, this is just another long weekend holiday, but to some of us today is the day we, as a nation, take to remember your sacrifice for our freedoms and our country and our way of life. Flying over the central Midwest (Illinois, Indiana, etc) hearing all the pilots wishing the controllers a “Happy Holiday” or “Happy Memorial Day”.

Jesus Christ on a pogo stick, people, this isn’t Independence Day, Thanksgiving, or Christmas. It is a day to reflect on the sacrifices those who gave their lives in defense of our country made for us.

I chose not to be an asshole and remind everyone of that on the ATC frequencies, but it was difficult. (Not being an asshole is difficult enough for me most days…., with Provocation, I should get a medal for what I don’t say)

So in Charleston, sum-dude was told to slow down when driving though a neighborhood. Being a thug, and taking offense at being told to behave, he left and returned with a gun…..(specifically a dreaded AR-15) and opened fire.  Dude had (had) issues with self control and anger, apparently….

A bystander, legally armed, ventilated him …ending the threat.. He is now at room temperature.

So, since the perpetrator is a Black Man, a criminal, who could not legally own a gun, who was stopped from committing mass murder by a legal carrier of a firearm, I expect the US media to downplay and/or ignore the story.

If ever there was a perfect example of “Follow orders even when you know it is wrong” then Uvalde is prime example.

Not only did the Uvalde police officers follow the orders of the chief to stay out, even though their training only months before told them to react and go in as soon as possible, they actively restrained parents who were attempting to go in to the school to rescue the children.

Even though they knew it was the wrong course of action. They followed orders. They stayed outside. Then they did their best (again following orders) to prevent the Border Patrol tac team from entering, again at the orders of their Chief.

How man children bled out in that hour? How many might have been saved had the shooter been neutralized in the first 20 minutes and had the kids been immediately taken to professional medical care, or even just paramedic care? How many more (if any) additional children were shot during the wait?

They Followed Orders even when their training and their conscience told them the orders were wrong.

Think about that. What happens when they are told to herd you into a boxcar? Will they Follow Orders?

ETA: The point I am trying to make here is that the cops chose to follow orders no matter what….Despite training, common sense and all the other factors…..THEY FOLLOWED ORDERS rather than do what was RIGHT.  Shows the mindset that tells us that, when the time comes, they will Follow Orders even if they are not in the best interest of those citizens who they purport to serve, protect, and defend.

But every time details from these shootings emerge, the picture becomes clearer that there is more to the story than we are being told….and it appears that these victims are just sacrifices to the agenda….

Lots of other details shared with previous massacres if you bother to look. Plus the timelines are always in the months before an election (draw your own conclusions there)…..

You gotta wonder if the Uvalde shooter also had someone in the Federal Government that he was communicating with via chat or facebook or other internet forum  like all the past shooters…..

I mean, it’ll go along with the propped open door at the school….. and the incompetence of the sheriff ….But at some point all the other details simply don’t make logical sense.

Why was that ONE door unlocked at the school in Uvalde?

Lots of things about this just smell bad. This is one of them.

Of course, it was my lawnmower but whatever….