Skip to primary content
Skip to secondary content
I and my family (and especially my Dad and Mom) could use your prayers or good thoughts for my Dad,

Today is the day for his heart valve replacement.

Supposed to be all but “routine” and all, but still….open heart surgery.

So whatever good energy you can send his and her way would be appreciated.

Made an offer on a decent 182P today. We shall see. I have verbal acceptance, but nothing in writing.

Also did some pattern work. 3 landings and a go around. There was only a 45 minute window to rent a 172 today, and the following week is gonna be too busy for me to be able to fly. The three landings were decent, and the wind gust caused me to weathervane at about 5 feet before landing, so I saved the tires and went around instead of skidding sideways.

My prayers are for the victims and families of the victims of the shooting at the Tree of Life Congregation Synagogue.
Or, perhaps, they didn’t get the  liberal and undecided  voter base as energized as Soros and the DNC thought they would.

So, apparently, someone pulled the funding for transport and Food and Water and other logistics…

And, oddly, the Migrant Convoy has splintered…with about a third of them turning back, a third staying in shelters along the southern Mexican border, and a third still undecided.

But they simply turned it off and then back on again.

Apparently, it worked though.

Some Suspected Mail Bombs Were Not Capable of Exploding

Pretty inept, whoever the perpetrator was….If they wanted to do more than scare people and make a big HuHu.

I still hope that whoever he or she is, they catch him and incarcerate him for a long time.

ETA: Apparently a suspect in Custody….and (and this is significant!) they used his cell phone to track him down. (For good or for bad, having a cell phone in your name destroys your privacy. Even a burner phone, once you take it home, can be linked to you. If it is co-located while  turned on with your “normal” phone, it becomes linked to you, especially if you drive with both phones powered up.  So don’t do illegal shit , and the authorities won’t have a reason to use your phone to track you)


Seen on a car near a police station in Indiana:
Wasn’t a Police car, as far as I can tell.

Kinda macabre, but still, pretty cool.
I may have to get one for the front of my truck though. 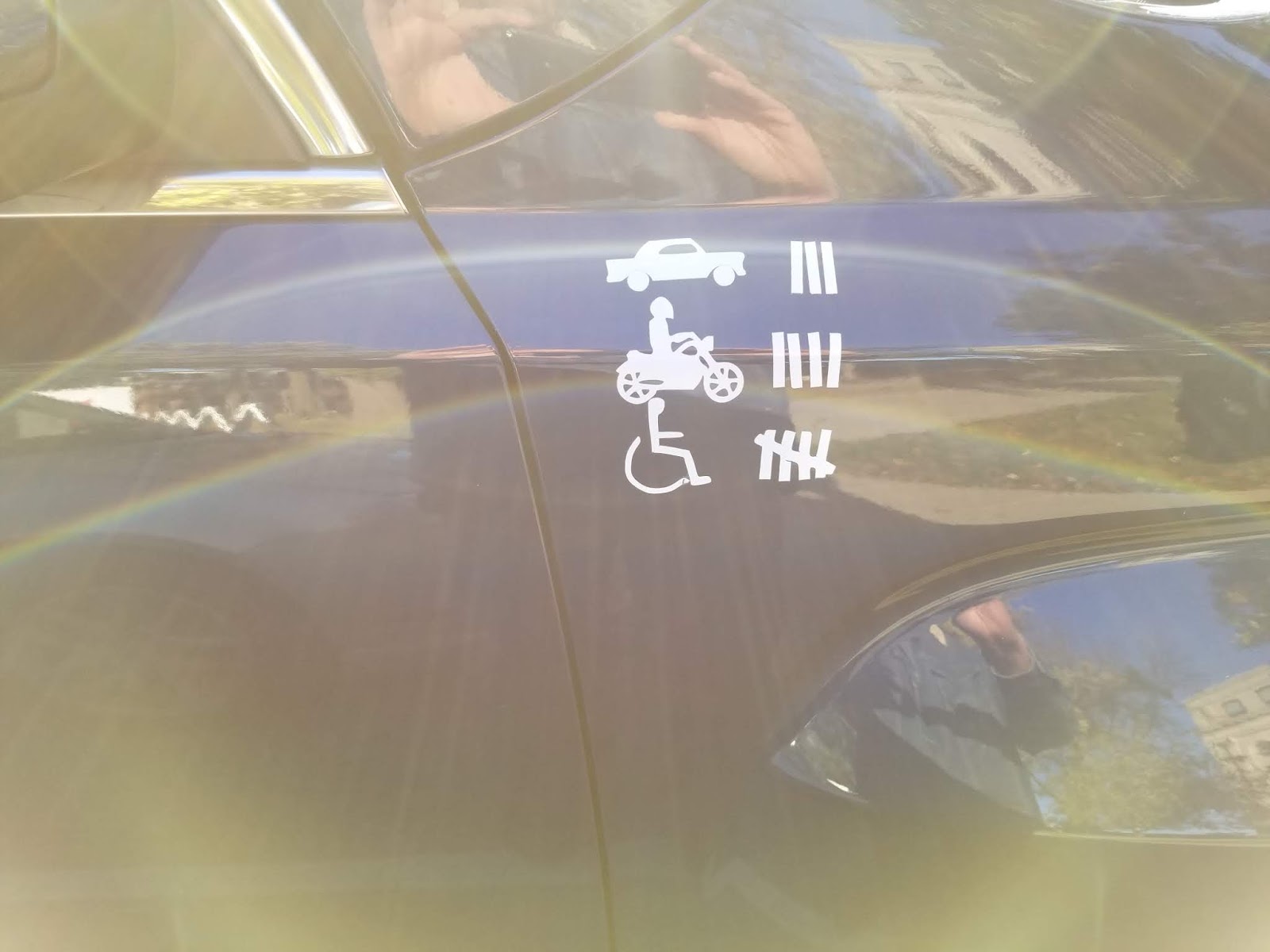 “ A lot of Democrats have openly called for civil unrest. They’ve excused and condoned violence for political purposes. Well, this is what that looks like. If they advocate this sort of chaos and lunacy, they shouldn’t act surprised when they become targets of it.”


Be careful of that for which you wish….you might get it.
This woman tried being assertive.…and, oddly enough, people LISTENED to her, and took her as….await for it….A LEADER….Odd how that works. She gave direction rather than asking for a consensus…she made statements that left no room for prevarication, she gave FIRM timelines…and, guess what? People treated her as they would any leader.

She, of course, claims it is “Entitled White male “swagger”” that made it all work for her….not, the fact that she was decisive, didn’t try to reach a “Consensus”,  wasn’t “inclusive” didn’t try to make sure everyone was satisfied…didn’t take excuses, didn’t give extended deadlines, just, like any real leader, expected results and was, like any real leader, firm and clear and gave orders…..and expected those orders to be followed. In  other words, she acted like a boss and got treated like a boss. Like a leader.

Her story is a perfect example why women are “underrepresented in leadership roles”…why so few are top bosses. Why they are fewer in upper management. (Hint, it has everything to do with timidity, and culture of women and failure to take charge, and little to do with your actual physical gender).

Does anyone think that these are real? That they are anything but either really poor amateurish attempts to make bombs, or (more likely) to make something that LOOKS like a bomb? (Or at least the type of thing that looks like a bomb as seen in the movies.

PVC? Hard to get any decent pressure to make ….well, either you understand or you don’t. I’m not gonna give any clues. Coiled wires leading to a box from the ends? Yeah, it looks like a movie version of a “bomb”…meant to be seen and identified when the package was X-rayed. I’m surprised they didn’t write “Bomb” on the side in bright red marker just to make sure that it would be identified properly.

Plus of course the “timer” as means of detonation. I’m surprised they didn’t use a “Baby Ben” alarm clock (kids, ask your parents)…..

Plus, of course, those 6 stamps…even though the packages were delivered by a courier, not the USPS.

But hey, it makes for good press don’t it? Lots of pictures and something for the Talking heads to talk about. And, of course, a mostly uneducated audience to believe.