Skip to primary content
Skip to secondary content
We will talk about “Where Scotland used to be“.

Much like Califronia, the people voted into power seem to be trying to destroy the place.

To not break laws when you can’t afford to pay the fines.

In a federal lawsuit filed Wednesday, attorneys for the two say North Carolina’s practice of revoking drivers’ licenses of people who can’t pay their traffic fines and court costs is unconstitutional because it violates the rights to due process and equal protection under the 14th amendment.

What do you want to bet that these 2 people have had a drink 4 or 5 times a week, Or ought a coffee from a coffeehouse….or eaten out since they got those fines? Unless they are already eating rice and beans, I’d bet they could have come up with the money, had they chosen to do so by making that a priority instead of spending money on other things….

Most people make different choices. Some never learn. Which category do you think these folks are?

So the Border Patrol wants to fill in the tunnels they find that go under the border from Mexico to the US…used to smuggle people and drugs into America…..

Makes sense, right? If the tunnel is filled in, then no one has to sit at the exit and watch to make sure it isn’t still being used….

But the EPA  requires a permit for “Remediation” to fill in the tunnels with gravel and cement. It sometimes takes months for a permit.

Yet, oddly no one got a permit to dig the things in the first place. And no one got fined for doing it, either. Seems the EPA has it’s priorities all screwed up, doesn’t it? Perhaps they could use their SWAT team to guard it instead of CBP officers.

Keep firing until he falls away from you.

If a dude walks or runs up to me wearing a clown mask in an alley after 11 pm, I might be surprised enough not to shoot at first too….

All they are worried about is a job and a retirement.

“This is a great opportunity for senior or [soon to be retiring] guys, not for someone like me. It’d be suicide. I hate to say it, but neither the judiciary nor the executive branch is wielding any kind of effective oversight right now, and the top managers know it.”“You still have a ton of bad people in place. Unless that changes, and I haven’t seen any degree of seriousness on the part of ranking members nor staffers, I’m not meeting with anyone nor willing to be subpoenaed. I’m not coming forward until they get their act together.

So much for their integrity as lawmen of the land.


“An individual, except the President, elected or appointed to an office of honor or profit in the civil service or uniformed services, shall take the following oath: “I, (State your name), do solemnly swear (or affirm) that I will support and defend the Constitution of the United States against all enemies, foreign and domestic; that I will bear true faith and allegiance to the same; that I take this obligation freely, without any mental reservation or purpose of evasion; and that I will well and faithfully discharge the duties of the office on which I am about to enter. So help me God.”

Instead of standing tall and saying:

“For the protection of our customers, and to make an enjoyable, safe environment in our customer areas, we have restricted the use of our bathrooms and public areas to our customers, not just anyone. The men who were arrested were politely asked to either pay for a drink, therefore becoming customers or to leave. They chose to do neither. When the police were called, they were again offered the chance to either become a customer or to leave. They refused to do either and were, therefore, arrested. This was a setup and we refute all claims of racism. Again, in order to use our facilities; bathrooms chairs, tables, etc, ONE MUST BE A CUSTOMER…no matter what their race.”

they chose to knuckle under to the SJW folks. they’ve spent millions of dollars and reignited the debacle and the media attention…

If you have Starbucks stock, I’d sell it.

“If something is not permitted, then it is automatically prohibited”.

Think about that statement.

This city’s government has the attitude that, if an activity is not specifically addressed in the city code and permitted by that same code, then it is illegal.

“The city had no laws pertaining to residential gardens, which means they were technically not allowed.”


According to the city’s laws, if something is not permitted it is prohibited.


“Right now, if there is not something expressly in this code that says that you can have one, you technically can’t,” Blakeman confirmed.

This attitude, folks, is the very definition of tyrrany

I would expect that the folks in Columbiana Ohio should think about this in the upcoming elections, wouldn’t you?

At least we don’t have things like this happen:

Tommy Robinson, a British activist and journalist, has been arrested outside a Leeds courtroom for livestreaming information about a Muslim gang on trial for raping and grooming hundreds of victims, some as young as eleven.

In other words, while the US has Free Speech, and the right to report trials, the Brits don’t. The government gets to decide what you can talk about (or not) as they wish….and you can’t do anything about it.

The best part is that the Judge banned anyone from talking about the case. So there WILL be no dissent. Or else.

If this isn’t a reason to show how our Constitution makes this country better, I don’t know how to show you any better.

Note: HE WAS ARRESTED AND JAILED FOR REPORTING the trial…..Not for doing anything else wrong…..But for simply showing the trial to other countrymen…. For bringing to light the crimes the the British government is trying to cover up….the pedophile group that abused children….

Why is the British Government trying to hide this?? Is it because the perpetrators are Muslim?

At least here in the US these crimes would not be hidden.

I expect that England, as we know it, is lost forever.

Remember WHY you got Monday off.

It ain’t “Barbecue Day”…nor is it “The Official Start of Summer”. 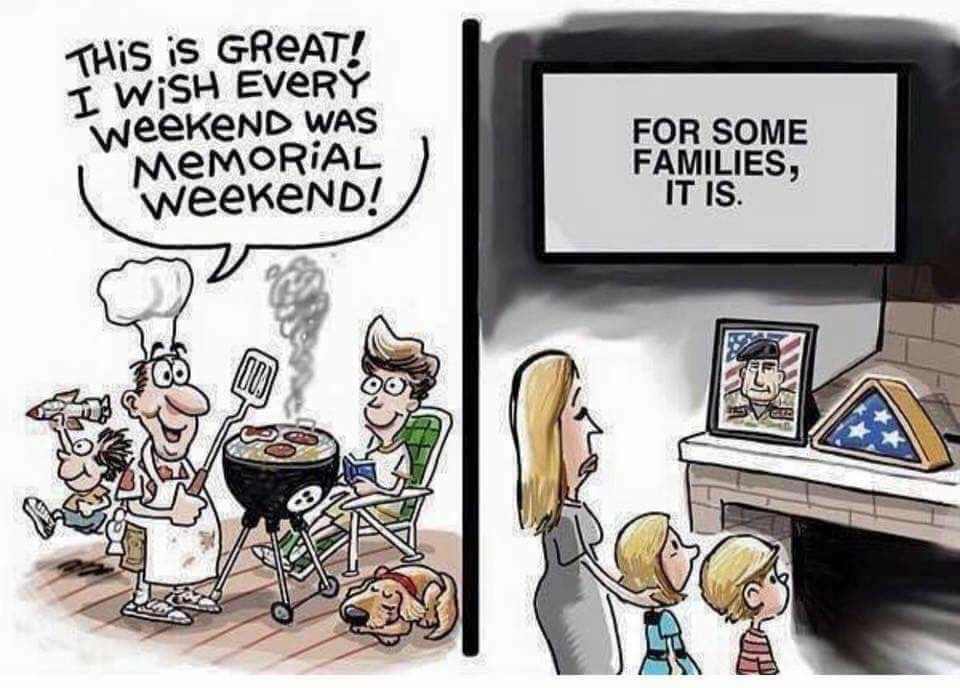 If this wan’t a moveable holiday, then perhaps people would remember.

Crowd boos, when told “there will be no anthem, Play Ball”….sings National Anthem anyway.

Because, you left coast assholes, some folks are still traditionalists and are proud of their country and are not ashamed to show it….