While I don’t think that the flooding in Colorado was unprecedented, it was unusual.

Is all yer stuff in a basement?

Got a sump pump? Have a spare? A means to power it? How about a manual backup?

Have you a secondary stash of supplies?

Have you gamed out all the “what ifs” you can and made plans for them?

The folks in Colorado obviously were caught unprepared….at least some of them. I doubt that they were all sheep either. Flash Floods happen quicker than you know. Now no doubt many folks never even considered that they were in a flash flood zone, or that rivers can and will leave their banks.

Living in or near a waterway OR DRAINAGE AREA is asking for disaster, especially if you are unprepared. Some towns are still cut off from the rest of us, as all their roads have washed away.

Wizard has the right of it.

For those of you who stand there and scream “SHallNotBeInfringed!!!!” Really, no one at Starbucks was or currently IS infringing.They chose to stay out of the fight. Let it be decided elsewhere while they sold coffee.

Really, all they are currently doing is trying to get the furor to wind down so that they can sell coffee and such. Nothing more.

They chose NOT to take a stand…which was, really a stand for our side. No banning of guns. No giving in to the anti gunners. Just no stand at all except “we follow state laws”. Nothing more.

This was a victory for our side. A win  Remember: Starbucks is private property.
But some dumbasses had to make a point and open carry a big hawgleg, or an AR into a place where they normally wouldn’t just to show that they could…and if it frightened some people, well, that’s ok too.After all, they point out, it worked for the gay folks 2o years ago…and the black people 50 years ago. But, boys and girls, this ain’t the same thing at all.

Now look: Really, the fact that Starbucks corporate chose not to take a stand was not only implicit support for all of us folks who carry, but was also opening them up to LOSING customers…the holophobes and the anti gunners. They are likely a significant portion of the Starbucks target demographic. And nothing we do is going to change their minds. But getting in their faces just makes them more vocal…. So Starbucks chose us over them…until some folks had to turn it up to 11 and get in peoples faces. And it backfired.

In addition, the fact that they welcomed us actually opened them up to significant liability if some bezerker asshole like the latest suicide-by-cop attention-seeking multi-murderer at the Naval Yard chooses a Starbucks for their last hurrah.

I’m not a big fan of Starbucks coffee, but I am glad that they chose to do what they did years before. They neither gained a customer in me, nor lost one.

Stop feeding the beast. Go if you like their product. Don’t (like me) if you prefer other purveyors of caffeine. If you do, be polite and cover up.

But don’t be a dick.

In Holland, not here is the US.

Seems that Holland has decided that they must make a choice.

New society will be a “Participation Society“……Fewer freebies. Less gifts from the Government. Not just cuts to the military, but cuts to Big Government programs like Job Retraining…Cuts in Health Care (who coulda seen that coming?) and other social programs.

Good to see that at least one European government has the guts to make hard decisions. Now if only OUR federal government could grow the stones to do the same.

Any bets on how long it takes before the serfs sheep people toss them out of office?

Not that the government nor the bureaucrats running the country care for it.

So I finally made it to the range to shoot my new upper.

See, just before Sandy Hook, I had ordered a heavy barrel .223wylde 20″ flattop upper from RGuns just before their prices went apeshit. What with the issues from that incident and the supply problems that that caused, they didn’t get it to me until late March. (they DID honor their lower price, even if they took 14 weeks instead of 4 to get it to me)

What with having a life and work, weather and all that, I never made it to a decent range until this last weekend. Seemed like every time I had the time to take a range trip to sight it in and do more than function test it, it either rained or was very windy or something else came up. So the upper sat, unused, until I had time to do things right. (my local range is .22 and pistol only, and 50 yards maximum, so no joy there)

And since MC had conspired with a friend to buy me an old Redfield scope that I had admired at a gunshow (diamond reticule, no graduations, 4×12 x 40) (see, I had looked at it, made an offer that was rejected, walked away…changed my mind and went back to buy it 15 minutes later and it was gone….but reappeared in a box when I had a birthday a few weeks later….sneaky), I had to find some rings for it and some folding BUIS.

Now: While RGuns lacks a LOT in service (customer service) (OK, they HAVE NO CUSTOMER SERVICE, but that is another story) their uppers DO shoot accurately. 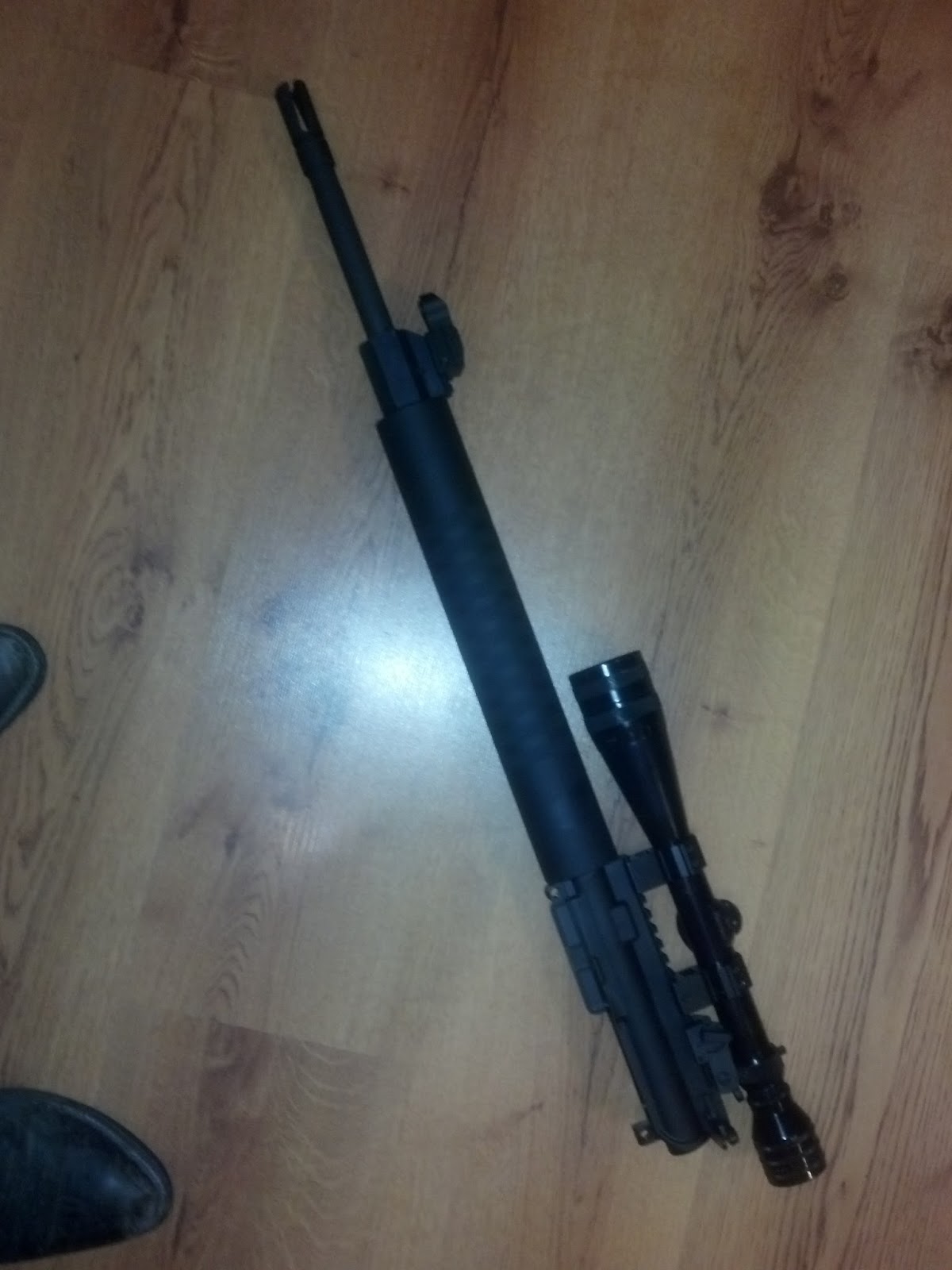 So, anyway, back to the story…I got the scope mounted to the  rifle with quick detach rings that JUST allowed the scope to clear the BackUpIronSights. and picked up an ammo can 1/3 full of Lake City 55G M193 from my stash…loaded the range bag with a few targets and some clothespins and a spotting scope and went with a friend to the range on Sunday. 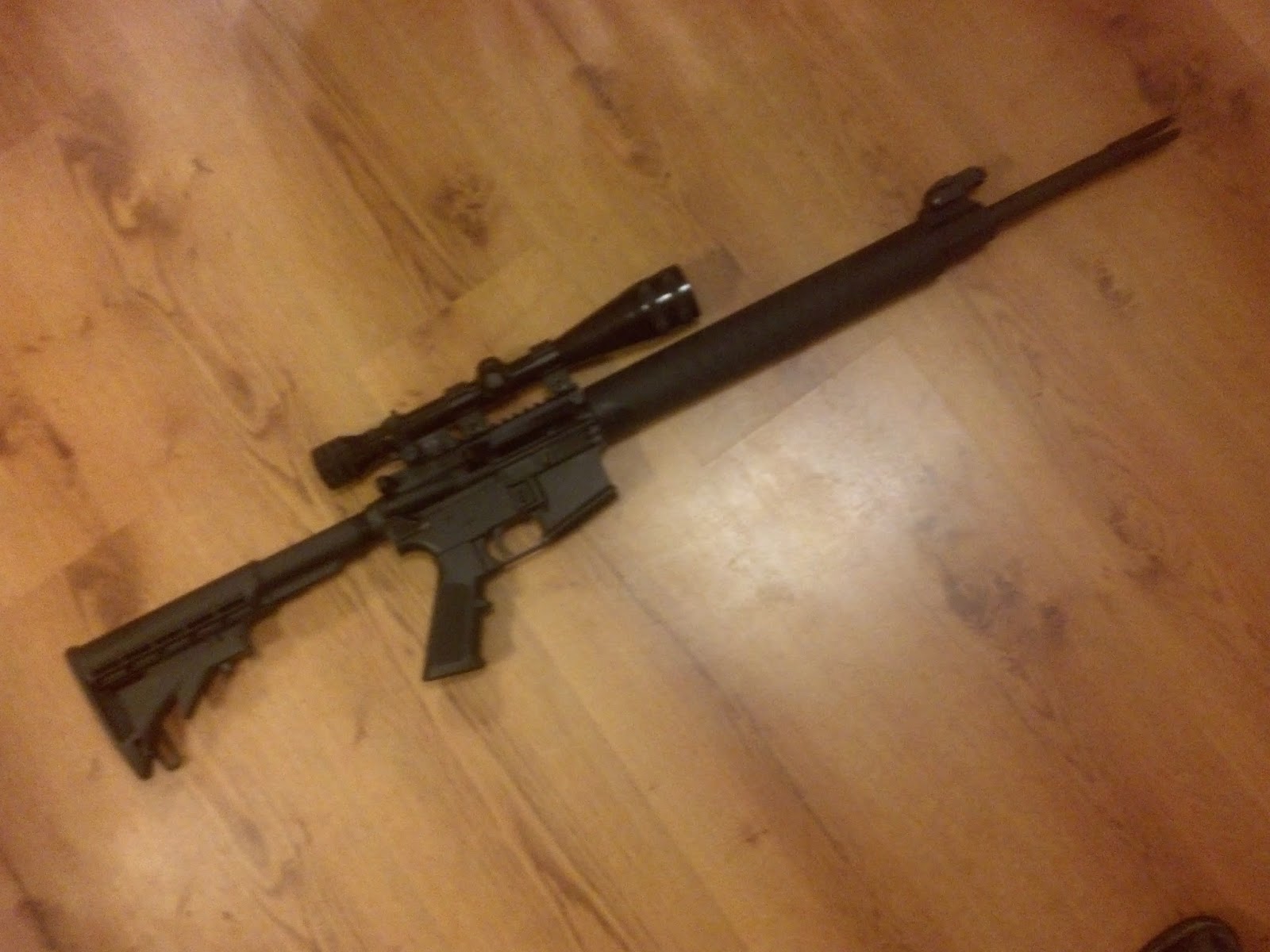 Conditions were overcast, about 58 degrees F and wind at 1-2 knots quartering from behind me from my left. Nearly perfect.

First 5 rounds, the bolt didn’t want to go all the way forward…would go all the way with the forward assist, but not on it’s own…..broke the rifle down, couldn’t find anything wrong. Reassembled and fired another 10, using the forward assist for the first 7. Then the bolt worked as it should. Not sure why that happened. It would go with no cartridge, but not when stripping a cartridge from the mag.??? Anyway, after a few shots that issue disappeared.

With Mike spotting, I found that the iron sights were shooting OK windadge wise, but were about 8 inches low at 100 yards. I reached into the range bag, but my sight adjustment tool was nowhere to be found. Looked and looked, but the tool wasn’t in the bag, even though I had put it in the bag the night before. Gone to wherever such things (and maybe lost socks from the washer) go. Have to get another one. No sight adjustment for the folding irons.

Dead on for windadge, but low again for elevation. 12 clicks later, I was in the black. Now for some serious sighting in.

20 rounds downrange, a few small adjustments, and I was hitting where I wanted to.

After 80 rounds (4 mags) I was out of bullseyes on all four targets. (I was using some old (and moldy) NRA 50 foot bullseye (rapid fire) targets that someone had given me.

We moved to the 200 yard range and began again. with a 100 yard zero, the impact was ~3” low at 200 yards. At that range, at 12 power, I was chasing my heartbeat, but all was good. (I left the zero at 100 yards and just aimed for the top of the 7 ring). The wind had moved to over my right shoulder, but still only 1-3 knots. I commenced to mutilating paper. 90 rounds later, I was finished. My arms were getting shakey and I was beginning to wander across the target.

A little Loctite on the sight mounts  and some adjustment to the BUIS and I’ll be happy and all will be nearly perfect.

And educate them YOUR way…

Make them more compliant citizens with proper (and early) indoctrination.

Textbook: “2nd Amendment:”The people have a right to keep and bear arms in a state militia”.

Not the way I remember reading the Constitution  either….

But hey, catch them early, and maybe the indoctrination will stick. Especially if they have liberal parents.

Regarding all those communities and homes around Aurora and Denver and such that are having issues with flooding:

How many of those areas have flooded before? Say in the past 20 years? Past 50?  Before or after they were developed??

Or is this flooding “never ever happened before” flooding?

See, around here, it is the same areas (and the same houses) that flood every few years.
Bet it is the same there too.  This might be an unusual flood, but I’d bet significant money that is is not an unprecedented one.

There might be an unusual amount of water, and maybe even higher currents because mankind has channeled some of that water in a tighter area than nature intended….But those same areas have likely seen floods several times this century.

The fact is that this will happen again. People shouldn’t live in these areas. If you live near a river, you can bet that AT SOME POINT the river will become unruly and will leave its banks.

If you live in area that floods, even occasionally, you can bet that your stuff will get wet. You may not be aware that such things have happened on the past, but the precedent is there.

Look: I understand flash floods. I’ve experienced them myself. But I don’t LIVE in areas that experience them. If you choose to do so, then you have to deal with the consequences.

And for Gods sake, don’t drive into water that is deeper than the center of your tires, folks.

Why haven’t you seen much (if any) coverage of this on the MSM? ?