So Saturday, I went to look at a different airplane. THe 182 is on the market and I am gonna upgrade to a twin, so I went to Creston, IA to look at a Cessna 340.

Left at 8 AM (13Z) and departed straight west. Called Chicago and got flight following at 6500 ft as it was a beautiful VFR day (I had tried to look at this airplane twice before, but, while I didn’t mind departing IFR FROM my home airport, I did want it to be VFR at the airport where the plane was, so had cancelled twice) so I didn’t bother to file IFR. 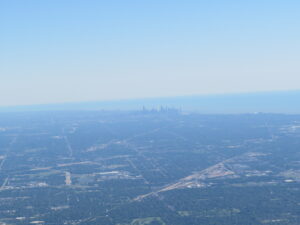 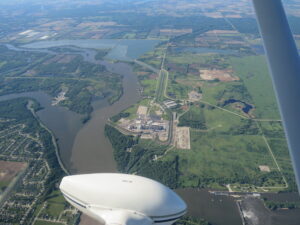 Then I passed over the (I think) Dresden nuclear plant 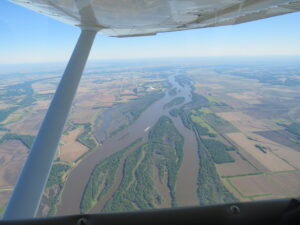 Then the mighty Mississippi

Then it became more or less boring farmland until Creston….Where I called 10 miles, then 5 miles, overflew the field, and entered the downwind to a nice landing on RWY 34.

My contact met me at the FBO (Which was very nice, if small and plain) and we went to look at the aircraft.

Did an long inspection, (Hey, it ain’t my aircraft, but it might be my ass) and a good preflight, then fired up and taxiied to the end of 34 for a departure.

Me like….a lot. half fuel and only 2 people and twin 325 HP turbocharged 520’s. Climbed like a fighter with that low gross weight… ‘Twas an aircraft one could easily get behind, as fast as it is…but I managed to stay with it. Ths is not a “Seat of the Pants” airplane, but rather a “Fly by the Numbers” airplane.

About an hour later, after flying, climbing, doing a pretty thorough checkout, I returned to the Creston airport and entred the pattern. a decent, if not perfect, landing (hey, my first time for the type) and we taxiied back to the hangar.

Then it was time for a preflight and a departure in the 182..the fuel station a KCSQ was having issues, so I decided to get fuel enroute.

Climing to 5500 after departing Creviston, I found the expected headwinds…20 or so knots. About 30 minutes later, I encountered 35 knot headwinds…..So I stopped for gas at Ottumwa. I figured 20 gallons would get me home with an hour reserve….and it would have…if it wasn’t for the headwinds that climbed to 47 knots. So I stopped for gas again at Peru. 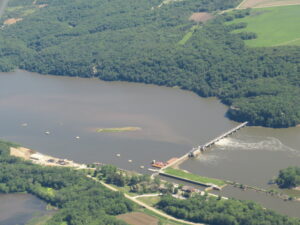 On the way back, I passed over one of the set of locks on the Illinois river just past Peru.

It took a longer time to get home..nearly 3.5 hours. But it was a smooth flight until I crossed the Indiana border and started descending for landing.

I might just buy this 340…it has everything I want in an airplane. A bit (ok, a LOT) pricey….but maybe.