Skip to primary content
Since Mike Bloomberg appears to have bought off convinced the DNC folks to allow him to run as a Democratic Presidential candidate (despite missing several primaries and therefore those delegate votes)….

and since rumors are strong that he will ask Hillary VonPansuit the loser Clinton to be his Vice President….

I cannot help but think that this has some merit: 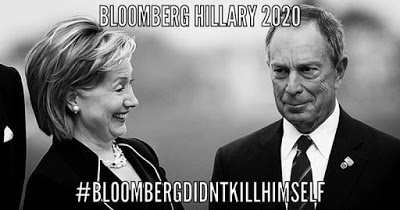 If it should come about, does anyone know where I can buy some Life Insurance on Mikey? Or a bookie who will give me some odds for him to survive his first 365 days in office? I’m thinking 8:3 against is where I’d go. Maybe even 7:10 against.
Just sayin’