Skip to primary content
Well, that was a surprise.

We toured the B-17 bomber, and the Mitchell, and then MC pushed me in the direction of the table where they have people sign up for the Bomber rides.
I have been on those rides before, and while they are pretty neat, I didn’t want to spend the (large) dollars to fly on one again. But I was willing to shell out the bucks if she wanted another ride in the B-24…
Nope, She wanted me to sign the papers to fly in the P-51, which she had previously paid for and which was ready for me….
Now, I’m cheap frugal…..I would never pay for such a ride for myself, and she knew this. So she bought it for me.
She paid for a half hour ride. Pretty serious $$. But “No Refunds”….so I accepted the gift and signed the papers and walked to the plane. 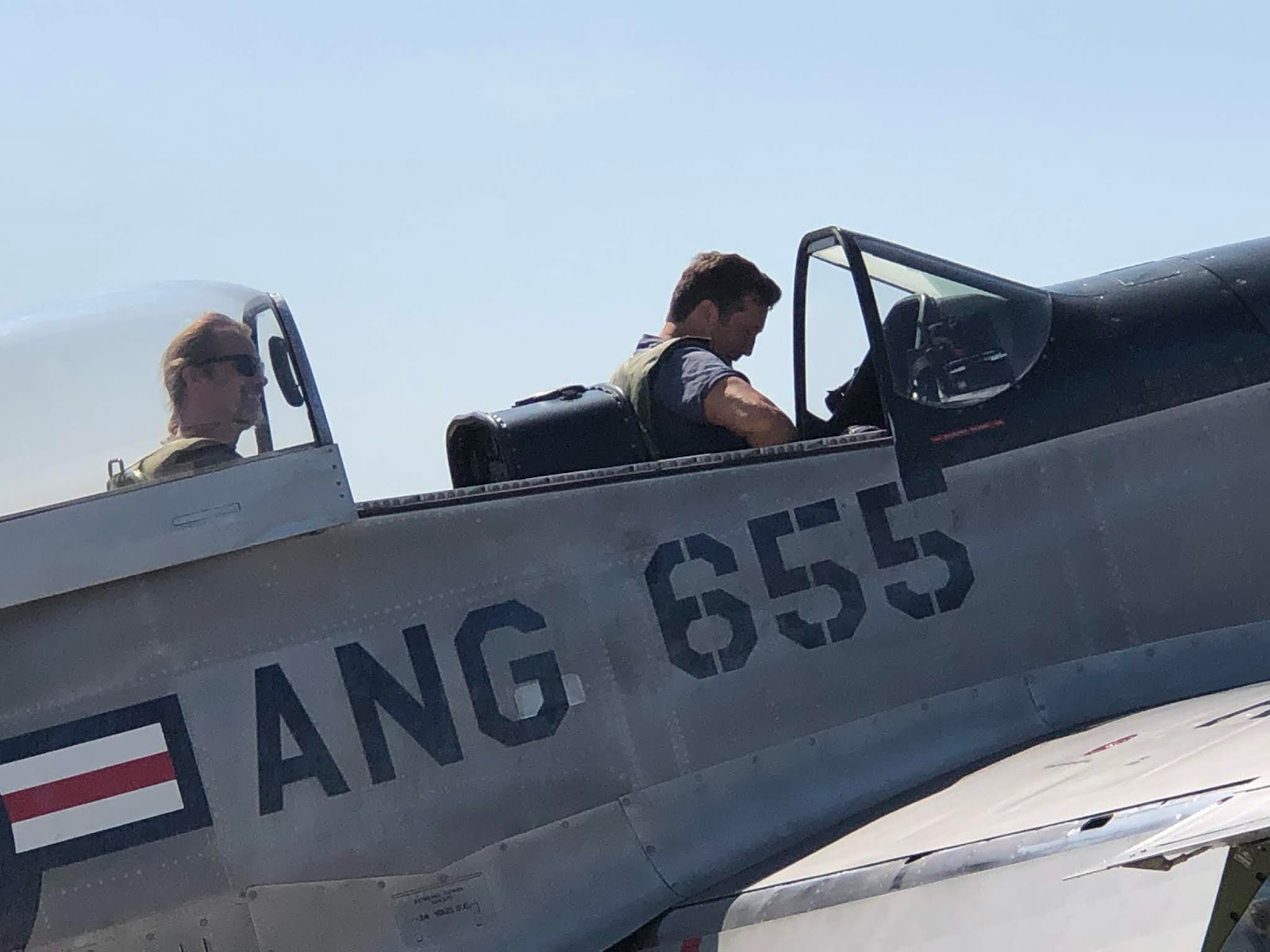 But, it seems, as luck would have it, that they had decided to do a formation flight with the P-40 and the Hellcat. So the pilot of the P-51 asked if I would mind waiting while they started the other two aircraft and they took off. (duh, of course I objected I agreed to wait…..)

So we watched, and waited while they fired up, first the -40, then the Hellcat, then we fired up the Mustang and taxiied to the end of  Rwy 9 and lined up and took off.

Acceleration on takeoff is jet-like….in about 3 seconds, the tail comes up and about 5 seconds later,  we climbed out to enter a pattern for the airfield.
The P-40 joined up, then the Hellcat.

We orbited for a few passes, then the -40 broke off, 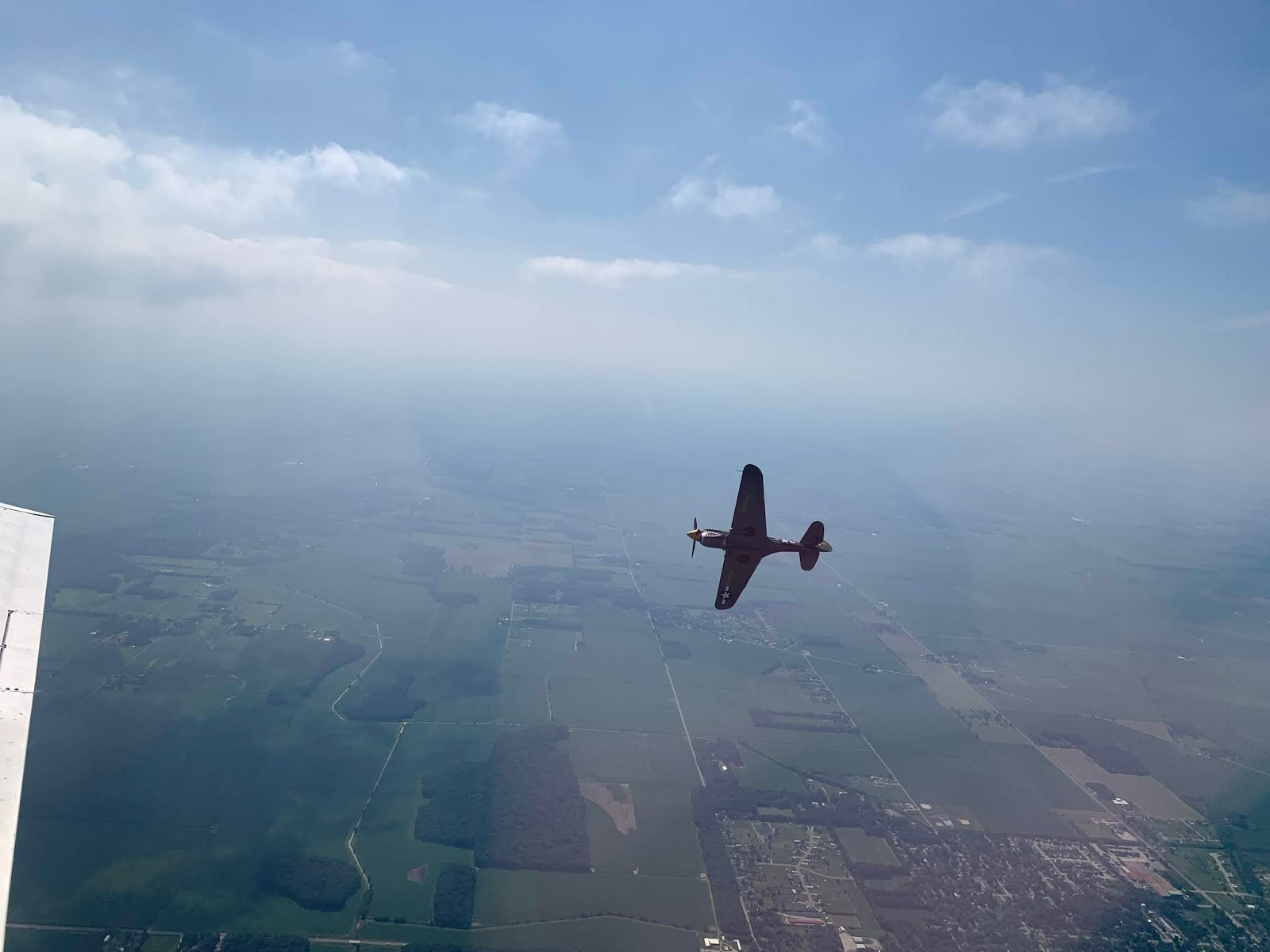 We flew with the Hellcat for a few more minutes, then the Hellcat peeled off. (sorry, no picture)

“Are you ready?” asked my pilot…

“Of course” I replied.

We climbed to 9500 feet, and did some aerobatics. first a roll, then a 4 point, then a barrel roll. Some lazy eights, then a cuban….

Then he offered to let me fly.

While the sight picture is different (the cowling is about 6 times longer than that of my 182), and there is an illusion with the cockpit rail which makes the backseater want to raise the nose,  it only took me a minute to find what level flight looked like. I held straight and level for a minute, then tried out the controls, pitching up and down, banking left and right, yawing a bit.
The P-51 aircraft is easy to control. Trimmed out, it flew with very little effort. I did a turn to the left, then one to the right. Ron (the pilot) urged a steeper turn. I did…45 degrees….”No, steeper”…So I did, pitching at 60 degrees. “no, steeper“. So I did…nearly 90 degrees…..it is easy to do when one has about 1200 HP to keep the airplane flying.

I did some real turns, pulling better than 3 g’s. Put the nose on  the horizon, bank, and PULL it through. It’s hard to do when one is used to a Cessna 182…flying like that would pull the wings off of my airplane….. But I soon overcame my caution and had a lot of fun,…Now I know, and truly understand,  the term “Yanking and Banking“……. “you aren’t using the controls enough, Don’t be nice.. Fly this plane”.  So I did. It was FUN!.
That is a REALLY fun airplane to fly. With a bit of practice I think I could learn to be pretty smooth….

“Do a roll”. Huh? “Do_A_Roll!”. Ok, so I did. The first one wasn’t as smooth, as I let up on the left aileron too early so I didn’t end up wings level…, but the next ones were pretty good, first to the left, then to the right. Pretty easy, actually.  My 4 point rolls were shaky, …I’d never done those before, but the second set was better…Again, horsepower makes it easy to do. (I’m used to 230 HP in a 2900 lb gross weight airplane at 130 knots, not 1200 HP in a 9000 lb aircraft at 250 MPH…the difference is significant……way more energy and WAY more recovery). Cubans are fun to do when the airplane is designed to be “Yanked and Banked”….

Basically, with Ron’s encouragement, I was allowed to play with this airplane. It’s like being given the keys to a GT road racer and being told to play with it, only in three dimensions..(and yes, I’ve raced some high performance cars…the comparison is close).

Too soon, it was time to return….I flew the route back, and the pattern (250 MPH!…In the Pattern!!!) until the final turn and then Ron took over for the final and landing….

We touched down and he taxiied back…

And before I knew it, It was over.

Not many pictures, because I was TOTALLY surprised and unprepared for the whole experience…and I was engrossed in the flying…pictures came last… Had I known, there would have been a GoPro with me….But it was a surprise….

But it was great! Fun, exciting, Hands on, Interactive. 4.5 G’s. Noisy. Gobs of horsepower…. A real blast.  A great experience.

I’m kind of a lucky guy. It was a great surprise and a great gift.

I really want a P-51 in my Christmas stocking….(and a large checkbook for fuel and maintenance)…

And I got 0.9 hours of P-51 Mustang flight instruction time in my logbook…

I don’t really think a non pilot can appreciate and understand what this aircraft is, or what it can do….I am sure that they enjoy the flight, but as a pilot, I can REALLY appreciate this plane.

4 thoughts on “I could learn to like flying one:”