So the day was cold, clear, bright and not too windy.

And I was hungry for something different.

Forecast to the east was for lower clouds, but forecast to the west and south was clear until after 5 pm. About as VFR a day as it gets. Clear below 12,000, not to windy, and visibility close to “unlimited”. Winds aloft were 190-220(ish) at 11.

So I flew to Springfield Il…home of the “Horseshoe”.

French fries, meat, covered in cheese sauce…What’s not to like?

Did a flight plan on ForeFlight…

Pulled the 182 out, did the preflight, calculated fuel (tanks weren’t full) and fired it up. Wind was 160 at 8 so I chose to take the southern runway and taxiied, did a runup, and took off.

Called ATC and asked for VFR Flight Following, got a sqawk code, and flew on course. The sky was clear, and as I climbed to 6500 ft (best wind) it was smooth as silk. and by smooth as silk I mean just that. All the flight there was ZERO bumps. nothing. What with the cold temps, the plane flew great in the dense air, and the engine felt like it had an additional two cylinders….I hate winter, but I have to admit that cold dry winter air makes for wonderful aircraft performance.

1 hour 38 minutes later, ATC turned me over to tower and I was cleared to land. I did what I think may be the smoothest landing I have ever done. (and the bar for that is getting pretty high lately)..The runway at Springfield is fairly new, and what with the smooth touchdown I never even felt the wheels start rolling….

Anyway, since it was my first time at the airport, I did have to ask for some help taxiing, but once I got that, I taxiied quickly to the FBO. Stellar Aviation was not the best service I have ever seen. They were polite but desultory….Just going through the motions, but no entusiasm and really didn’t care. No Crew Car available, so I chose not to buy fuel (hey, if I am gonna pay a premium for  fuel, then I expect some benefits….) and instead called an Uber and off to D’arcy’s Pint...a place renowned for it’s hoseshoe sandwiches.  (D’arcys is open for indoor dining, but they have obviously just recently (re)-restarted and are still adjusting to the new covid rules….)

The wait was 20 minutes and it wasn’t cold in Springfield (high 40’s and little wind) and soon enough we were seated..

Deep fried Cheddar chunks for an appetizer, and then the food arrived: 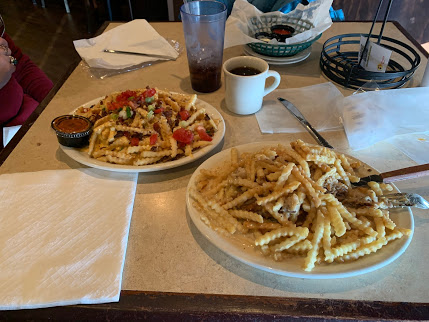 Yeah, under that pile of fries is (on the right) a half pound of country fried steak and the fries are covered with sausafe gravy..The other one (left) is the more traditional Horseshoe.. I gotta say that had I not been flying the sandwich would have gone MUCH better with a beer, but not for me as I was piloting…

After eating, a short Uber ride back,  and as we were walking out to the 182, up pulled a Diamond DA-62…an aircraft that is on my list of twin engine planes to buy (should I suddenly find a bag containing 1.4 Million dollars)…We chatted with the pilot and his companion, admired the plane, talked performance, said “thanks!”  and then turned back to my 182 and did the preflight and fired up ….and had to wait while the Citation that pulled up in front of us was moved by the ground crew because the inconsiderate pilot stopped short and blocked the row behind from moving…(there is something about pilots of privately owned jets…so many of them are sloppy rude assholes……)

Anyway, called Clearance for a sqawk code, called ground for taxi permission, taxiied, did our runup called Tower and told them we were ready for takeoff, and were on our way.

Left turn on course, over to ATC, and an hour and 11 minutes later were entering the traffic pattern for landing….put the plane away, did some paperwork (plane logbook, my logbook) and back home. The flight home was as smooth as the flight out…

What with taxi and runup and waiting for the jet to be moved, total airplane time was 3.2 hours.. 39 gallons of fuel, and fun day. Plus good food.

Hopefully, in the near future, Covid restrictions will clear up (now that Biden is in office) and I can do what I bought the 182 for….fly and see things….Go places and meet people….

4 thoughts on “Flying for horseshoes.”