Skip to primary content
So we traveled to Texas….Tyler, Texas, to be precise….I looked at Southwest flights from Midway to Dallas. $849 round trip plus surcharge. More at peak hours.  Each. (times two ’cause, while I COULD leave MC behind, then I could never return home).
Plus Parking at MDW

Then I looked at the cost of flying my 182. (yes, I wanted to fly my OWN plane there, but I DID try to look at the economics)

6:30 total time  each way more or less (including routing around Saint Louis and either Little Rock or Memphis). My cost per hour including maintenance? $110.

Time is a wash, as the travel time To MDW, then parking, then TSA, then being there a half hour before boarding puts us at least 2 hours, (better plan for 2 and a half) plus 2 :30 travel time, plus 2 hours from DAL to Tyler….

And besides, I wanted to fly the damned plane.

So we flew private. As in Private Plane private style.

The weather on the trip down was AWESOME. Clear skies and a 4 knot headwind on our first leg….2 hours to Mt Vernon Illinois. Flight Following all the way, great controllers. Pleasant and professional. 8500 ft at 128 knots indicated….142 true. 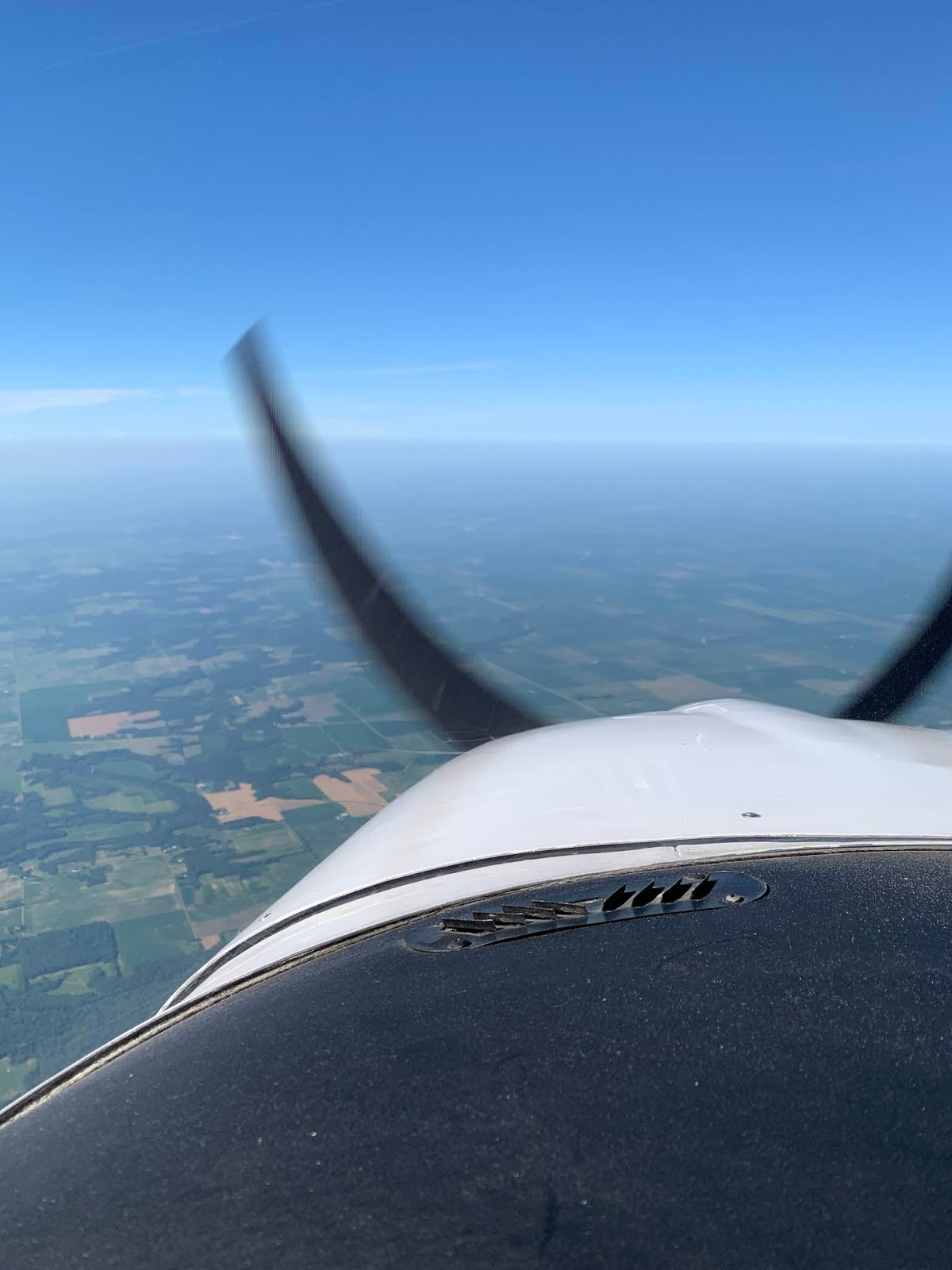 Mount Vernon is a VERY nice, well kept airport. Cheap fuel and a decent FBO…Pleasant people too.
Took a short walk, did the necessary, and we were again airborne.

Second leg was to Stuttgart Arkansas, just south and east of Little Rock. 8500 and (since it was hotter) 124 indicated (about 146 true according to the GPS calculator)

We did cross the Mighty (muddy) Mississippi River…It was out of it’s banks. 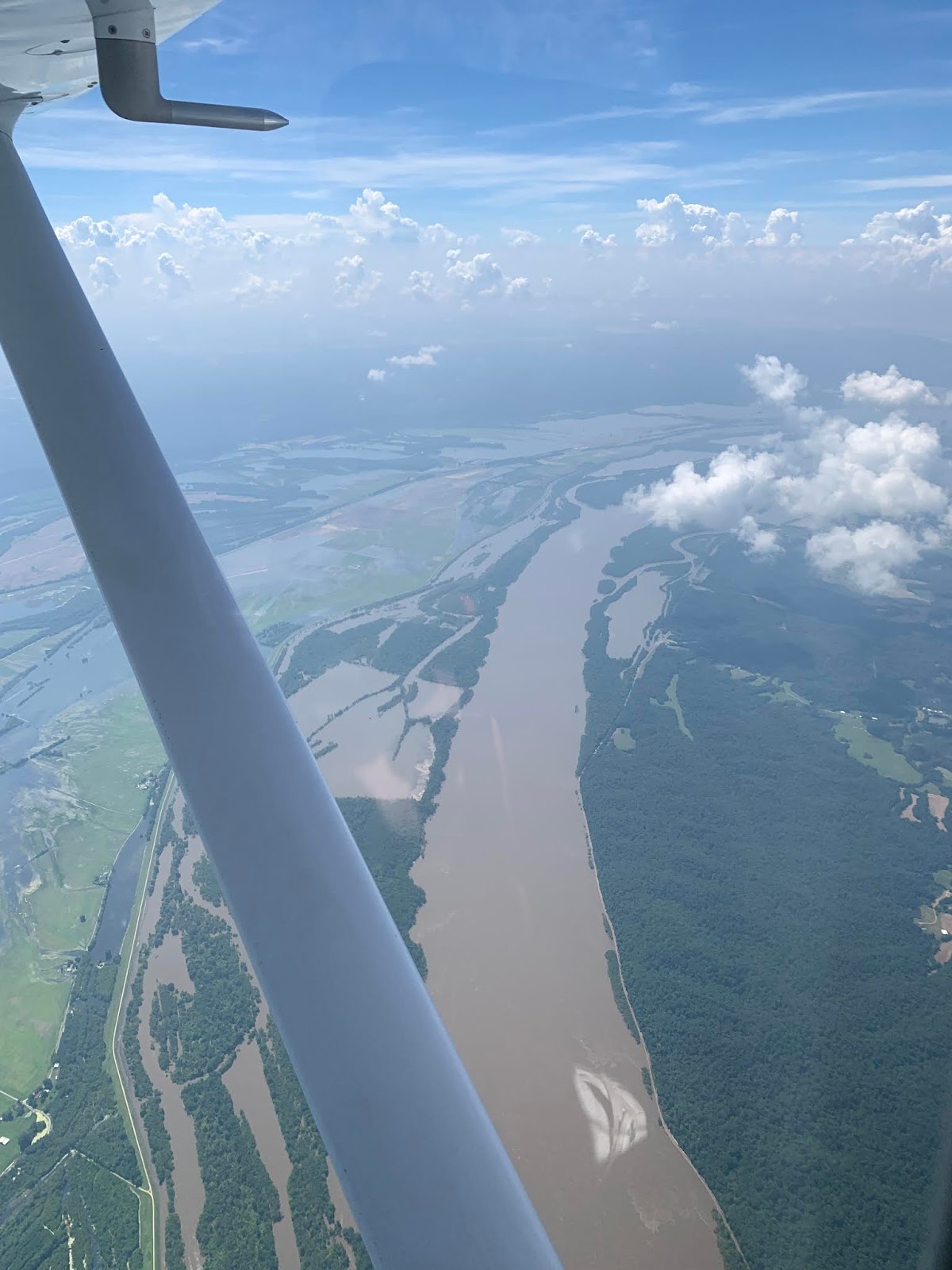 Not much there. Self serve fuel and, while the Runways were well kept (Markings were fresh and such), the rest of the airport is….well-broken in, shall we say. Lots of cropdusters in the area….and none of them use the radios! Stuttgart was, once, a VERY nice aerodrome…now, sadly, neglected.

We filled up, walked to the airport building to use the facilities, listened to the phone ring at the airport office while we did our business (there was no one there for the 15 minutes we were in the building…good thing we are honest) and left. Lining up for departure, AFTER I had listened to the radio and called “Departing RWY 18” we had the fun of watching another cropduster land at that moment on 36…No radio calls, nothing. Just heading right at us as we began out takeoff roll….Disconcerting, I must say, even at the far end of a 6000 foot runway.
Interesting, that. Them boys are crazy.,,,,but all cropduster pilots are. We stopped our takeoff, he turned off at the first taxiway, and we again began our takeoff roll, this time without any other traffic scaring me.

Departure was without incident.  Again, Flight Following and great controllers. 6500 (per the controllers request (for traffic) and 133 indicated. I didn’t bother to calculate the true airspeed. (it’s still on the far side of 150 MPH)

We went past Texarkana, and were deviated a bit by Longview approach for a small pop-up thunderstorm that was just sitting in our path….

Passed off to Tyler tower and, once I figured out the right runway …their runway numbers are SMALL… we got on the ground and parked (with a bit of taxi assistance by the ground controller) and found our FBO.

Johnson Air in Tyler is a nice facility. They were pleasant and professional….But they forgot to order our rental car…..and there were none to be had at that late time in the day…So they gave us a crew car for the first evening and most of the next day until they could get a rental for us. Screwed up, but made it right, which is all one can ask.

Dinner was Stanley’s Barbecue…not fancy, just plain damned good food. Exactly what I needed after a long day of flying…that trip down was (until then) the longest I had flown in a day.

And off to our hotel.

More later as I have time to put another post together.

3 thoughts on “Texas flight (part one)”