Skip to primary content
So we flew, MC and I, along with my parents, to Champaign, Illinois for some badly needed Chinese food at her favorite restaurant.

Pulled the 182 out of the hangar

Time to get there: 44 minutes. (We had a nice tailwind going south)….Ground speed 154 knots for a while.

Got a Crew Car, had the FBO put in 25 gallons of 100LL and we were off to the Chinese place for some chow. Beef with Broccoli for me (over Fried Rice) and my Dad had Chicken and Mushrooms.  Mom had some LoMein and MC had (of course) Crispy Fried Tofu (her favorite).

Some shopping on the way back for some odds and ends at the International Market for some odd and strange foods and snacks (Octopus Balls, anyone??? (sorry, no pics)),  and orange Kit Kats, Green Tea KitKats, strange flavors of Japanese Pop Rocks (and other stuff like that) not available elsewhere, and some more shopping at the Junque Store Consignment shop. Then we returned to the airport, preflighted the plane, loaded up, started the engine and we were off.

A quick conversation with Clearance, then switched frequencies to Ground, then a taxi, a runup then switched to Tower, (all the same dude) and we were given clearance to depart on Runway 32 with a right turn on course at 3000 or below.

Switched when told to to Departure (a different dude) then climbed to 3500 and tried there. (Pretty turbulent). Handed off to Chicago Approach and then we told ’em we were gonna climb to 5500 to find some smoother air. Not much smoother there (a bit less sharp), but less headwind.
At 3500, I could not let the Autopilot (George) fly, as it couldn’t handle the turbulence…kept trimming up and down and trying to maintain a heading…I as afraid we’d burn out a trim motor….(Up/down/up down/up down/up/down…..) At 5500, “George” could handle the flying…less turbulence and steady(er) winds. So I let him fly for a while. What with the headwind, the ground speed wasn’t as good, but we still made over 110 knots.

Since I wasn’t flying, I had time to look down. Gotta feel sorry for the farmers. Many (2/5) of the fields still have either standing water or water just below the surface. I don’t see how they are gonna get a crop in the ground anytime soon. 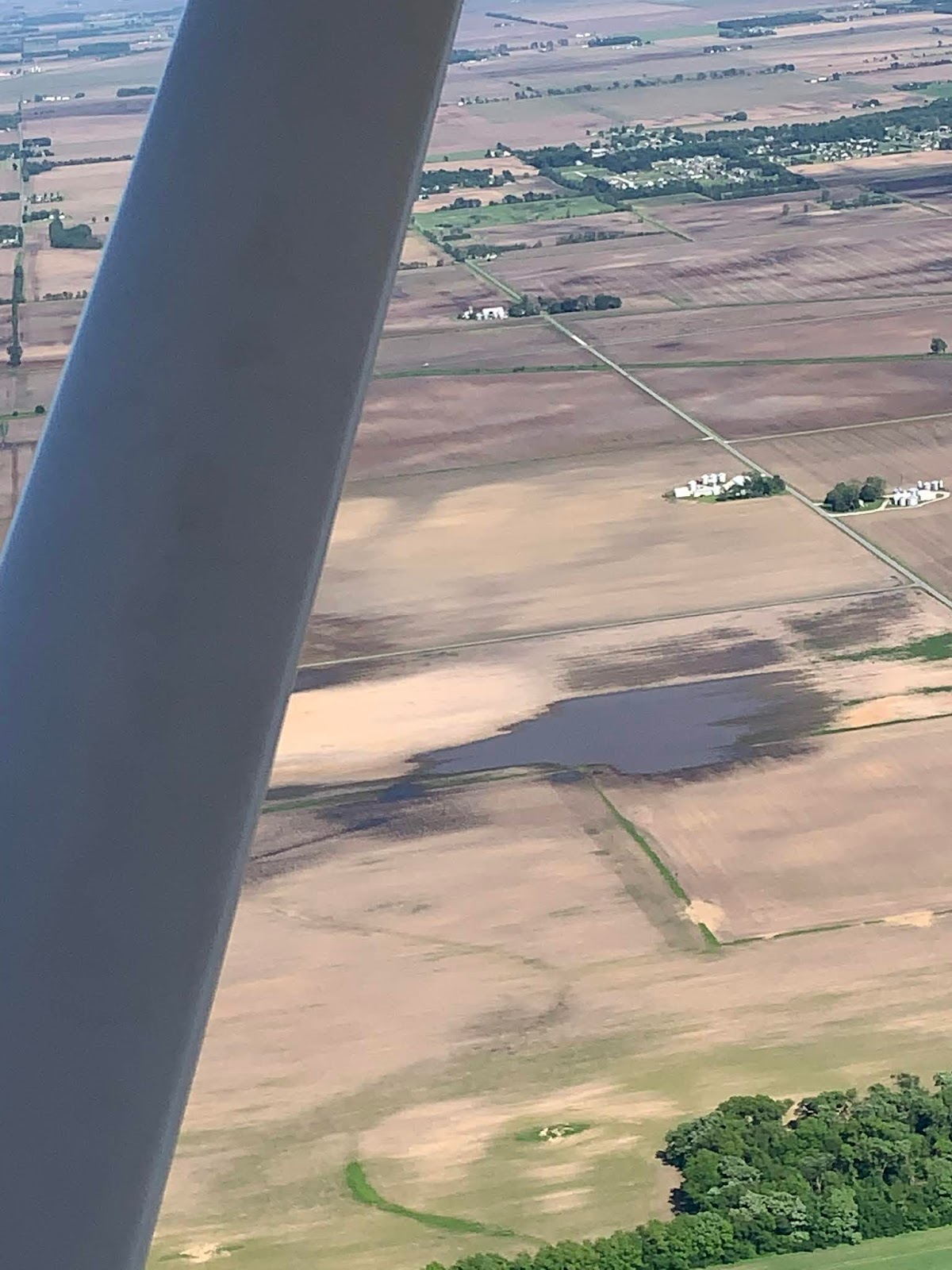 Soon enough, it was time to start the descent to my home airport. “Slow down to Go down”…so a bit of power reduction and a bit of trim and we descended from 5500 to 3500….made our “10 mile out” call on CTAF, then a slower descent to 2500 and a 5 mile out call. Did a base leg entry to the runway and fought the thermal on final. 16 gusting 24, so a bit fast. A gentle bounce on touchdown (just a bit too fast but there were gusty winds on final so there is that……..and we were near gross for the density altitude also (That extra 350 lbs makes a HUGE difference in the sink rate)) and we turned off and called “Clear of the Active”. …I don’t feel too bad as the dude with the TBM who landed right after me did the same bounce and had the same struggle on short final.

Taxiied back to the hangar, did the shutdown procedure, opened the hangar doors and put the plane away.

A good day spent with MC and my parents.

Being able to go to lunch 100 miles away and back in a day is why I learned to fly.

‘Tain’t cheap, but worth every cent.

2 thoughts on “George flew us to lunch”