SO the global warmists/climate change believers/total whackjobs are saying that the rate of increas in the sea level is accelerating.

But two things: First of all, the method of measurement has changed. This is a bigger deal than you might think, because the new measurements do not correlate with ACTUAL DATA from the continuing older methods.

and, secondarily, one would wonder what other causes there might be….

If (and it is a very big IF) the rate of sea level rise has actually increased in the past 70+ years or so, one would wonder if there is correlation to the rate of building that has taken place….and perhaps farming…both of which cause significant erosion of soil.

Erosion likely accounts for a significant amount of the real sea level rise…The slow wearing away of the earths surface. (eventually the earth will be a giant salt water swamp, with all the mountains worn away and the dry land washed into the sea).

Estimates are that the total amount of sediment washed into the ocean by rivers alone is 60-80 BILLION tons per year. Add in coastal erosion and you have a significant amount of sediment ending up in the ocean every year. Increased construction in nearly all countries, mining and farming…….

Add in the fact that many of our rivers (and rivers in nearly all semi industrialized countries) have been straightened and otherwise controlled, leading to faster flows and less natural deposition of sediment, and you have a significant amount of sediment that is deposited in the oceans that wasn’t going there before.

Smarter people than me can do the math and tell me what percentage of the (supposed) rise is caused by increased erosion.

But I haven’t seen his addressed by the climate change folks either…all they do is pint to the current estimates from satellite measurements (which don’t correlate with older measurement methods) and cry “catastrophe!” 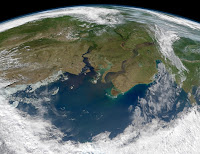