So I bought a Taurus TCP to replace the Kel-Tec that I broke….Last week at the gun show, I tried out a bunch of small, polymer handguns…..I tried the S+W Bodyguard, but I really didn’t want the laser. I tried out the Diamondback (not polymer) and it was too heavy… I wasn’t gonna get another Kel-Tec, and there were no other small .380 pistols that I saw…. Except the TCP.- Slightly larger than the P-3AT, it had nearly all the features that I wanted. Small, light, decent (for a compact pistol) sights…Concealable enough for a jeans pocket or a lapel pocket in a suit. Thin enough to conceal easily. .380 (which is marginal, but hopefully enough should I need it) rather than .32 or .22.  Pretty much what I was looking for..

So I bargained with one of the sellers and purchased a TCP.  (The bargaining also included another pistol which may be in a later post, but I digress)….

Disassembly for cleaning is similar to any other small pistol of the type. Pull a pin, slide the side off of the frame, lift out the recoil spring from the slide, and lift out the barrel.

Fit and finish on this pistol is good. The slide is tight enough, and the barrel to slide fit is fairly tight. No sharp edges or mold lines to deal with. The texture on the polymer is good, allowing a decent grip. The grip is slightly longer than the pistol it replaced, making for a better grip with only my pinky finger floating free. The slide has adequate texture to allow for easy action. The slide edges are well rounded and the sights are low profile enough to prevent snagging on a pocket.

Trigger is good. Long, but decent. (Say about 7 lbs). Not what I’d care for in a normal carry pistol, but for the type of carry I expect this to be used for, it’s just about right. One thing that separated this pistol from the others in it’s class is that that it is not a Double Action, but feels more like a LDA from Para. (but not really, either. It’s just a light single action with a long trigger pull).

Target shooting at 21 feet was good. With the long trigger, I tended to shoot low for the first few shots, but once I got over that, I found that I could shoot  decent groups. A bit more practice and I think that I can tighten things up a bit. Here’s a target after a few magazines to get used to the point of aim. 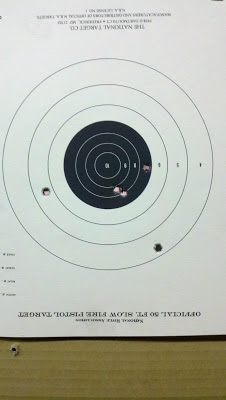 The lower flyer in the 5 ring is my bad trigger squeeze. (and yes, I had the target upside down) I found that after 5 shots rapid fire, the pistol moves around enough in my hand that I end up using way too much trigger finger. Have to work on that……I finally got the groups down to less than 4 inches……

Reliability was good. no failures to feed, no failures of any kind, actually. Federal bulk FMJ in both flat nose and and round nose fed flawlessly as did Hornady Critical Defense. All in all, I shot 154 rounds of assorted ammo through this small pistol. And my hand didn’t hurt at the end of it, unlike the pistol it replaced. Now all I have to do is shoot another 350 or so rounds, and if this pistol works as flawlessly as it has so far, I’ll trust it enough to carry when I need a small concealment pistol. 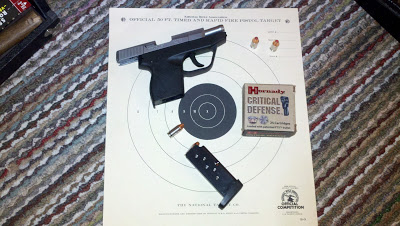 Overall, this is a good pistol. Not a great one for long range sessions, not a wonderful target pistol, and not especially powerful. Yeah, I’d rather carry my 3 inch Para in .45 ACP when possible (or a full size!), but that isn’t always easily accomplished in some social situations Nor is it worth the trouble to deal with the issues of others attitudes regarding firearms. The .380 in your pocket is, however, better than the .45 under the car seat or on your bench at home when you are in the bank or at the store….if you happen to need it.
I’d recommend this pistol to anyone needing or wanting a small light polymer pocket pistol.
(note to the FTC: I paid my own hard earned samolians for this device. No one offered me any incentives to do this range report. All you folks in the Federal Trade Commission can go screw yourselves. Piss off…Go find someone else to hassle. Kiss my ass.)