So I bought the Llama Micro Max a few weeks ago at a gun show. I have a friend who has one, and I like 1911 pattern firearms, and a guy at the gunshow had one, and I really needed another small carry gun and I had the cash and it was a screaming deal, so……

Anyway, the firearm was likely fairly new, as it had apparently had very few rounds through it. Not even enough to make a ring in the bluing where the barrel meets the bushing..So, the week after I bought it, I put 100 rounds of assorted ammo through the thing at my local range. It fed nearly everything except some hollowpoints, but it had case ejection issues with many of the brands….And it beat up the mouth of the brass that it did eject.

The magazine was dirty, gritty, and the follower didn’t want to let you load the first round, as it jammed every time at the top of it’s travel. The trigger was decent, but needed a bit of work. The frame rails and the slide itself were terrible, almost as if the final deburring had not been done at the factory. The final polish was obviously skipped…… for the safety, grip safety, and the slide release were sharp enough to cut skin. The ejection port was damaging my brass, and the ramp was needing a bit of work…..

Now, this thing looks like (and mostly is) a true 1911 pattern firearm, with the exception of the barrel link….. It is not a true 1911 as the operation is blowback rather than a locked breech, but close enough. The engineering which must have gone into this is incredible. Shamefully, the finished product did not come near the potential this firearm had.

Ok, so I detail stripped the thing, and began to remedy the failure of the factory to finish the machining on the frame and the other moving parts…. 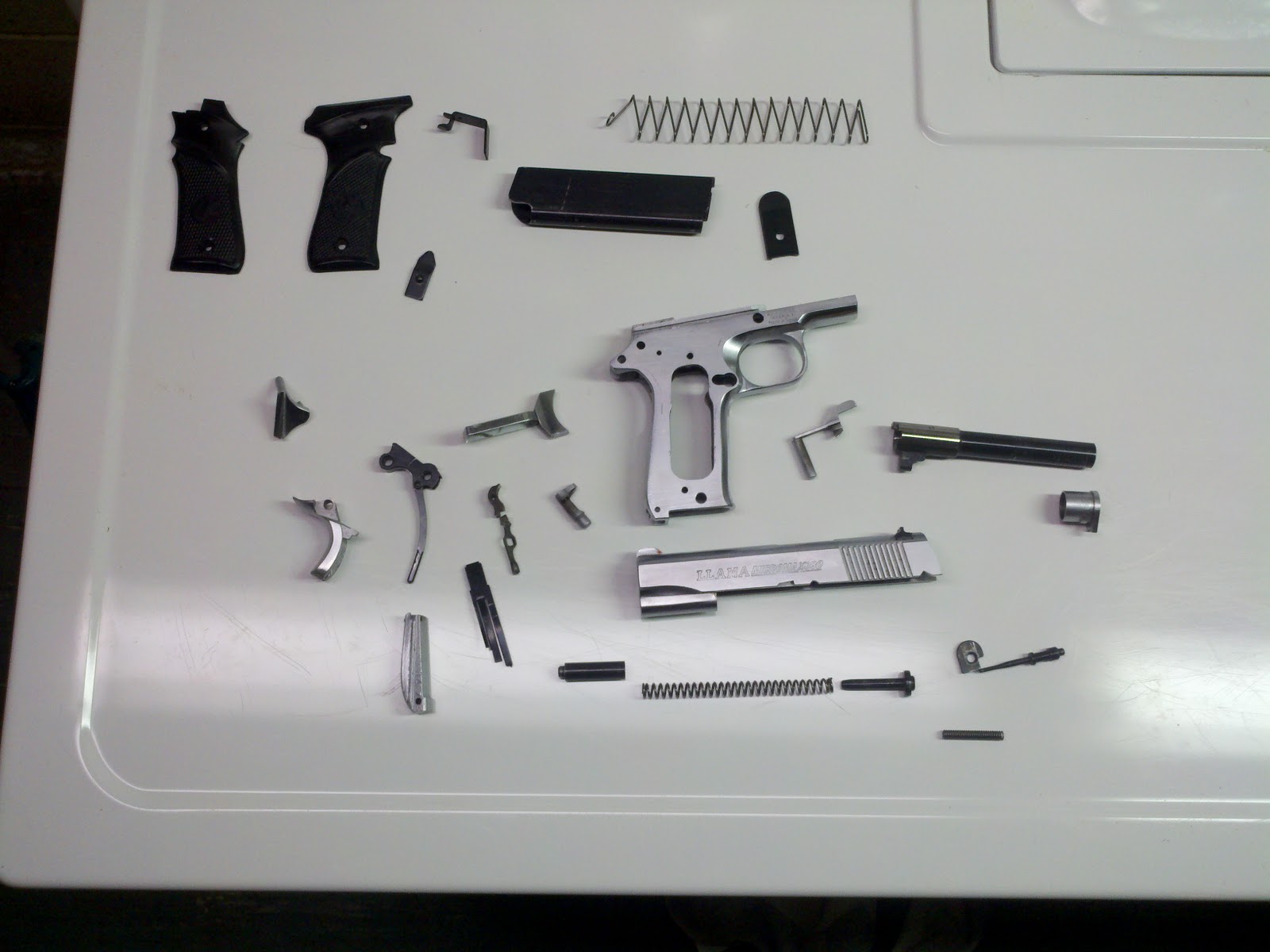 I opened up the ejection port (polished and lowered it by about 1/10 of an inch) to prevent the brass from being damaged and to aid the ejection issues….

Polishing the internals took a bit more work, and a lot more time with the Dremel. The sear, hammer,  and disconnector took the most work. Getting the edges sharp and smooth was a bit of a pain, but I got them done to my satisfaction (no. I did not use a Dremel on the sear!). Polishing the feed ramp and the face of the slide took a bit of work to manufacture a polishing wheel that was the right size, but no real hassle. Polishing the holes and the pins and safety and slide release took a LOT of time, as I did not want to change clearances, but rather just polish. So, slowly was the theme for the day. Besides, those pins are hard to hold while polishing….and they get HOT! Eventually, I was finished.

After washing all of the parts in soapy water to get the remaining grit off and then drying with a clean towel,  I coated everything with Strike-Hold CLP to protect and lube things and then began the reassembly.

The only issue with this pistol is the size of the parts! I can reassemble a 1911-A1 with my eyes closed, even  from a detail strip. But getting things reassembled is a bitch when the parts are so small!  I had issues getting the firing pin back into the the slide, and getting the sear, and disconnector back into place was so difficult that I actually thought that I was assembling it incorrectly. I actually disassembled a full size 1911 enough to see if I had misremembered the way that the parts fit together. (I hadn’t). After a lot of work and cussing and finally getting a pair of tweezers, I got the thing reassembled.I need smaller fingers to work on this size firearm.

WOW. This is actually a VERY nice firearm. It has a 5.25 lb trigger, which breaks cleanly, (and I think it will lighten up a bit as things wear together. The hammer moves better, the safety and slide release work smoothly and well, and it will all but chamber an empty case.

This is what the designer no doubt envisioned when he did the engineering on the thing in the ’90s.

I ordered 2 new magazines, and when they get here we will see if I solved the ejection and feed issues.

If so, then I have other issues:

I have to find a holster….. preferably IWB, small of back.

I may have to try a Mini-Max in 9mm soon.